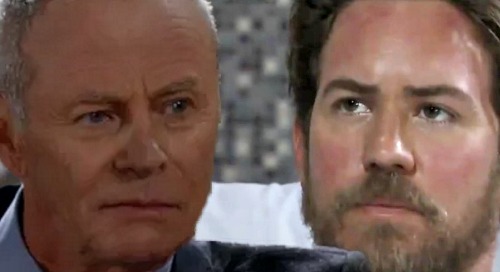 General Hospital (GH) spoilers tease that Robert Scorpio (Tristan Rogers) may take Peter August (Wes Ramsey) up on his offer. Peter is convinced that knowledge is power. He claims to have valuable info on the patients that came before Jason Morgan (Steve Burton) at clinic in Russia. GH fans will recall that Jason was “Patient Six.” That means five patients before him are still unaccounted for.

Peter’s willing to provide the details and help the WSB, but he’ll need his freedom in exchange. Robert’s anxious to put Peter away, so he won’t like this idea at first. He may even think it’s a desperate ploy. However, Peter might offer a little preview of what he could deliver. If he gives some crumb that can be confirmed, Robert may see this as a tempting opportunity.

Back when Jason’s return storyline kicked off, General Hospital viewers grew curious about the other patients at the clinic. Are they also memory-mapping victims? Did something else bring them to the Boronsky Clinic instead?

Ava Jerome (Maura West) took a trip to Russia for cutting-edge plastic surgery, so that opens up more possibilities. Valentin Cassadine (James Patrick Stuart) recommended the facility since he’d had extensive surgeries there. They were able to transform his life with their groundbreaking procedures.

Patients 1-5 could be high-profile criminals who changed their looks to avoid detection. If Peter has evidence of what they look like now, that’d be a huge win for the WSB. Then again, these people could also be captives like Jason was. They might’ve been moved after Jason’s escape, but they may still be stuck in a hostage situation somewhere.

By giving Peter his freedom, Robert could free other individuals and reunite them with their families. Since Laura (Genie Francis) is coming back to GH soon, it’s possible this could tie in with Nikolas Cassadine (most recently Nick Stabile). If Laura’s presumed dead son was part of some experimental treatment, Peter’s info could lead to his rescue.

Of course, there are more sinister options to consider. Those patients might’ve been programmed and sent out for twisted schemes. Robert will be busy trying to save Anna Devane (Finola Hughes) for a while, but Peter could spill what he knows to another WSB agent. Once Robert finds Anna, she may even reveal something that backs Peter up.

Whatever the case, this could all be leading up to Peter’s plea bargain. If the intel solves some cold cases and puts far worse villains away, the WSB may even drop the charges. They’ve got bigger fish to fry, so Peter may get off the hook for his crimes.