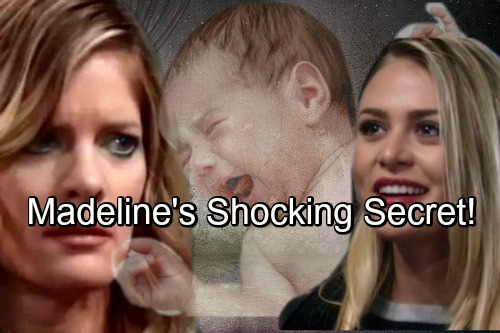 General Hospital (GH) spoilers tease that Nina (Michelle Stafford) will continue to have issues with Valentin (James Patrick Stuart). He saved her from a deadly fate after Liesl (Kathleen Gati) set the stables on fire, but that wasn’t enough. Valentin hurt Nina deeply, so her wounds haven’t been quick to heal.

This marriage could be on the verge of destruction, which could bring more heartbreak for Nina. If these two end up divorcing, it’ll certainly be Nina’s choice. However, that doesn’t mean it won’t crush Nina to the core. She still loves Valentin, so she’d inevitably find herself in an even darker place.

What could drag Nina out of that darkness? She could really use some good news! There’s a chance that GH will revisit an old storyline and take it in a new direction. General Hospital fans know that Nina was in a coma for over 20 years. Her mother, Madeline Reeves (Donna Mills), injected her with an overdose that supposedly caused her miscarriage.

Of course, that raises the possibility of a soapy twist. General Hospital could easily change the game by revealing that Nina’s child survived after all. Nina has enjoyed being a stepmom to Charlotte (Scarlett Fernandez), but she’s always longed for a little one of her own. Perhaps parenthood is still in the cards for her, but not in the form of a baby.

Nina’s long-lost child would now be an adult, so that could create plenty of complications. It’s worth mentioning that Donna Mills is set to make a GH comeback. She’ll reprise her role as Madeline later this month, so Nina might develop some suspicions and demand answers. Will Madeline admit that Nina’s baby was given away?

If Valentin does some digging and somehow points Nina toward the truth, that might earn him a few points. Nina would love the opportunity to connect with her kid. If Valentin isn’t involved, this could still provide some comfort. Nina will be searching for anything that can give her hope and peace.

Many GH fans have rooted for Nina to find a biological daughter in Port Charles. Nelle’s (Chloe Lanier) been tossed around as an option, but that ship has probably sailed thanks to her departure. Kiki (Hayley Erin) is another character who’s been considered. That might be interesting since she’s got a huge feud with Ava (Maura West) coming up.

If GH eliminates Ava and Kiki’s mother-daughter bond, nothing will stand in the way of Ava’s revenge – except for maybe Nina! Then again, General Hospital spoilers say another female character in Nelle’s age range may be needed.

Nelle’s exit will leave the younger set short a player, so GH might bring in someone new to fill that void. Nina could track her daughter down and bring her back to PC.

Regardless, General Hospital’s got some untapped potential here. It’d be a mistake to leave this story unfinished, so let’s hope Nina gets a long-lost child soon. We’ll give you updates as other GH details emerge. Stay tuned to the ABC soap and don’t forget to check CDL often for the latest General Hospital spoilers, updates and news.