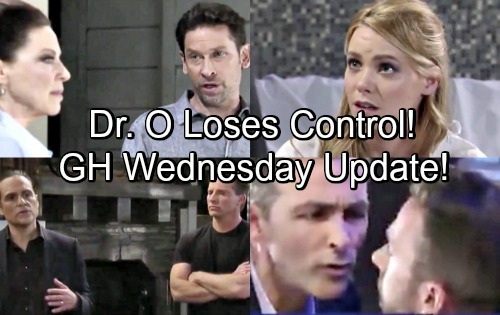 General Hospital (GH) spoilers for Wednesday, July 18, tease that Sonny (Maurice Benard) will get tired of being left out. During a tense conversation with Michael (Chad Duell), Sonny will insist on hearing the plan. He knows Michael intends to take Nelle (Chloe Lanier) down, but he’s not exactly sure how it’s supposed to happen.

Of course, there’s a good reason for that. Chase (Josh Swickard) and Jordan (Vinessa Antoine) don’t want Michael blabbing about the details. They seem particularly committed to keeping Sonny and Carly (Laura Wright) out of this. Once Michael fakes his death, perhaps they want his parents’ grief to be genuine. It would certainly help sell the story to Nelle.

Despite Sonny’s pressure, Michael may not be willing to come clean. He might suggest that Sonny will just have to have faith in his strategy. At GH, an uneasy Nelle will confide in Chase. She’ll admit she’s starting to have major doubts about Michael’s devotion.

Nelle will feel like Michael may be scheming, so Chase will have her right where he wants her. He’ll fuel the flames of Nelle’s next deadly plot. Nearby, Sam (Kelly Monaco) and Curtis (Donnell Turner) will approach Liz (Rebecca Herbst). They’ll want to chat about Franco (Roger Howarth) and what he might’ve shared about Liesl Obrecht (Kathleen Gati).

While Liz tackles their questions, Franco will have a fierce fight on his hands. General Hospital spoilers say he’ll try to help Dr. O, but she’ll turn against him instead. Franco will get bashed in the head by the end of this showdown. It’s clear that Obrecht’s spiraling out of control!

At the Wyndemere stables, Peter (Wes Ramsey) will keep working every angle he can. He’ll talk to Nina (Michelle Stafford) and once again push her toward self-preservation. Peter won’t think Nina’s getting much out of this hostage situation. He’ll want her to cut him loose and free them both from this nightmare.

General Hospital spoilers state that Nina won’t budge, but she’ll ultimately regret it. Liesl will eventually return to set a raging fire, so Nina will be in more trouble than she bargained for. GH fans won’t want to miss the scorching drama later this week.

In the meantime, Valentin (James Patrick Stuart) will put pressure on a familiar bartender. He recognized him as the fake CDC agent from the docks, so he’s going to want some answers. This guy seems pretty wimpy, which suggests he’ll sing like a canary soon. Once Valentin grabs him and threatens bodily harm, the actor may admit that Nina hired him.

Other General Hospital spoilers say Kim (Tamara Braun) will get some surprising updates. Julian (William DeVry) will open up about some complications he’s facing. He may be referring to the expansion plan delays, which were caused by Jason (Steve Burton).

Julian is facing a minor setback, but that may not stop a major discovery! There are big secrets buried under Charlie’s Pub, so Sonny needs to sort this mess out ASAP. We’ll keep you posted as other GH news comes in. Stay tuned to the ABC soap and don’t forget to check CDL often for the latest General Hospital spoilers, updates and news.