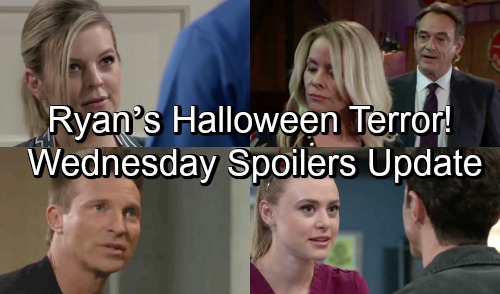 General Hospital (GH) spoilers for Wednesday, October 31, tease that things will be looking up for Griffin (Matt Cohen). He’ll seem optimistic about rejoining the staff at GH, which will please Kiki (Hayley Erin). She’ll be ecstatic about Griffin possibly getting his job back and being around more often. They’re still in the early lovey-dovey stage of their relationship, so they can’t get enough of each other.

Of course, that’ll just add to Ava’s (Maura West) fury. She’ll have a fierce run-in with someone on Wednesday, so it could be Griffin, Kiki or both. Then again, another character could get caught in Ava’s vicious path. She’s pretty much always agitated these days, so just about anyone could get Ava riled up!

Meanwhile, Ryan (Jon Lindstrom) will probably murder Mary Pat (Patricia Bethune) with the metal pick he found. He just found his makeshift weapon and took off after the former nurse, so Mary Pat may be a goner! Later, Ryan will find Ava and give her a pep talk. His words of creepy encouragement aren’t what Ava needs right now, but he’ll give them nonetheless.

Across town, Mac (John J. York) and Felicia (Kristina Wagner) will do Laura (Genie Francis) a favor. She’s got a campaign fundraiser coming up, so they’ll do their part by getting the party ready. Ryan will wander in and find Felicia busy with prep work. He’ll suggest that it’s his lucky day and continue his efforts to grow closer.

Elsewhere, Peter (Wes Ramsey) and Maxie (Kirsten Storms) will dress up for Halloween. They’ll have baseball uniforms on as part of the fun. Peter will eventually have to take off for the fundraiser, but he’ll ask Maxie if she’d like to go, too. He won’t want to cut their evening together short, so Peter will hope for a yes.

Before Laura heads off to raise some money, she’ll visit Liz (Rebecca Herbst) at GH. General Hospital spoilers say they’ll have a heart-to-heart about something significant. Liz will see how hard Laura’s willing to fight for those in need. She’ll have total faith in Laura’s ability to be mayor of Port Charles.

Other General Hospital spoilers say Jason (Steve Burton) will get something sweet. That probably includes a candy-filled visit from Danny (T.K. Weaver), who will be excited about Halloween. Naturally, Sam (Kelly Monaco) will be there to bond with Jason as well. They’ll make googly eyes as usual and hopefully inch closer to a reunion.

Next, there’ll be a party going on thanks to Franco (Roger Howarth). He’ll throw a Halloween extravaganza for several Port Charles kids, so expect a wild ride. Let’s just hope Aiden (Jason David) doesn’t get too overwhelmed. Over with Nina (Michelle Stafford) and Valentin (James Patrick Stuart), they’ll celebrate the holiday over dinner. It’ll be a step in the right direction for these still-in-love exes.

GH viewers will want to check out Wednesday’s action-packed episode. We’ll give you updates as other news comes in. Stay tuned to the ABC soap and don’t forget to check CDL often for the latest General Hospital spoilers, updates and news.