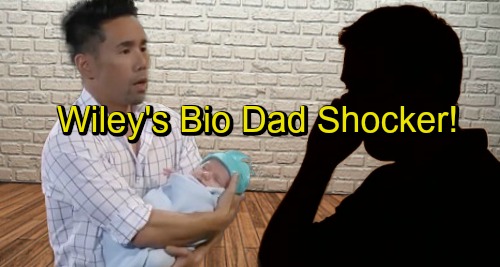 General Hospital (GH) spoilers tease that another threat could emerge for Brad (Parry Shen). When he swapped babies with Nelle (Chloe Lanier) on the side of the road, he had no idea what he was signing up for. Brad certainly didn’t expect so many obstacles when he agreed to pass Jonah off as Wiley.

Nevertheless, Brad’s in deep now and there’s nothing he can do about it. He doesn’t want to blow up his family, so he has to keeping fighting for their future together. GH spoilers say Nelle should remain a concern for Brad. She could easily reveal too much to Michael (Chad Duell) in another hurtful letter.

Of course, there are other threats Brad doesn’t even know about. Liesl Obrecht (Kathleen Gati) and even Nina (Michelle Stafford) the eavesdropper could cause problems. However, it could be a while before those two become a real danger. Another birth parent situation may cause drama first.

Julian (William DeVry) took care of the birth mom, but what about “Wiley’s” biological father? Alexis (Nancy Lee Grahn) implied that “Wiley” was the product of a hookup, so his dad was never in the picture. She suggested that the window for this guy to come forward had passed, BUT…issues like this are handled on a case by case basis. In other words, this man could still stir up trouble.

If Lucas (Ryan Carnes) somehow manages to find the bio dad, it could create a world of chaos for Brad. Even if the guy doesn’t have much of a case, his potential push for custody could lead to suspicions. That inherited heart condition could definitely come into play.

Michael recently mentioned that there are less than 20,000 cases a year. It’s doubtful the fake bio dad would randomly have the same condition. On the bright side, maybe that could work in Brad’s favor. It’d suggest that perhaps the birth mom was sleeping around and just guessed wrong.

There would have to be a DNA test anyway, so Brad may dodge one more bullet. It naturally wouldn’t be a match. Brad could just contend that “Wiley” came from some other one-night stand. In the end, Lucas may accept that they’ll never have the full info on “Wiley’s” health.

That’s when the true mayhem could break out. Just when Brad thinks this is all over, another hurdle should land in his path. At some point, Brad just won’t be able to keep it together! General Hospital spoilers say his web of lies is destined to crumble.

Are you excited to see where this baby swap storyline heads next? We’ll give you updates as other General Hospital news comes in. Stay tuned to ABC’s GH and don’t forget to check CDL often for the latest General Hospital spoilers, updates and news.