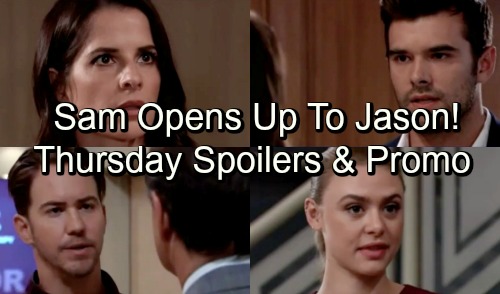 General Hospital (GH) spoilers for Thursday, September 27, tease that Jason (Steve Burton) will want to be there for Sam (Kelly Monaco). He didn’t understand the situation before, but now things are crystal clear. Sam’s been worried about Oscar’s (Garren Stitt) brain tumor and the thought of Drew (Billy Miller) losing his son. Scout is also Oscar’s sister, so this affects their family in a big way.

Sam may open up about how her heart’s breaking for Oscar. Jason will feel that same pain for his nephew. This could certainly help “JaSam’s” connection grow stronger. General Hospital spoilers say they’ll share some usual looks of longing. Will these two ever make a move?

Meanwhile, Lucy (Lynn Herring) will plan a friendly get-together. She’ll fill Mac (John J. York) in on the event, which will probably include Kevin (Jon Lindstrom). Too bad Kevin isn’t quite himself these days! Ryan (Jon Lindstrom) has taken over Kevin’s life, so he may use this as an opportunity to play the part.

Other General Hospital spoilers say Lulu (Emme Rylan) will schedule an important meeting. Perhaps she’ll reach out to Felicia (Kristina Wagner) and bring up the Ryan Chamberlain story. Lulu knows she has to handle all this with class. She doesn’t want to exploit Ryan’s victims in any way. Lulu will just hope she can write an accurate article and make people understand Ryan’s wickedness.

At GH, Maxie (Kirsten Storms) will have a proposition for Griffin (Matt Cohen) and Kiki (Hayley Erin). They’ll seem surprised by whatever Maxie’s cooking up. Could this involve babysitting or perhaps that concert everyone keeps mentioning? Regardless, Maxie’s suggestion should lead to some bonding time. Kiki and Griffin will likely inch closer to couple status.

At Charlie’s Pub, Franco (Roger Howarth) and Ava (Maura West) will enjoy a toast. They’ve both been facing family issues lately, but Ava’s are obviously far worse. Nevertheless, Ava will feel satisfied with her decision to cut Kiki out. Franco will think he’s on a better track with Liz (Rebecca Herbst), so he’ll suggest that they drink to happy endings.

Chase (Josh Swickard) will share a new lead on Thursday as well. He’ll tell Anna (Finola Hughes) and Finn (Michael Easton) the latest info on Liesl Obrecht (Kathleen Gati). The WSB is hot on Liesl’s trail, so Chase will hope they can bring her to justice.

Finally, Peter (Wes Ramsey) will pay “Kevin” a visit. Ryan may be able to squeeze a session in before Lucy’s little party. Peter will need this fake doc’s help, but trusting Ryan’s advice could be risky! We’ll give you updates as other GH news comes in. Stay tuned to the ABC soap and don’t forget to check CDL often for the latest General Hospital spoilers, updates and news.