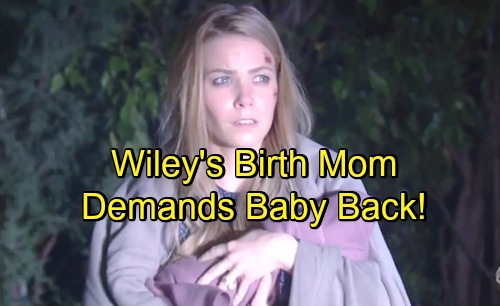 General Hospital (GH) spoilers tease that Brad (Parry Shen) just signed on for a whole lot of trouble. Anyone connected to Nelle (Chloe Lanier) seems to land in a tight spot eventually. Brad’s the latest GH character to get caught in drama, but he only has himself to blame. He could’ve turned down Nelle’s baby swap offer, but he just couldn’t go home and break Lucas’ (Ryan Carnes) heart.

Of course, it’s fun to see Brad get back to his scheming roots. Since he’s doing the wrong thing for the right reason, that makes him sympathetic in this case. It’s the perfect opportunity to give Brad and Lucas (Ryan Carnes) an intriguing story.

General Hospital spoilers say it won’t take long for obstacles to hit. For starters, several people saw the real baby Wiley. Alexis (Nancy Lee Grahn) and Julian (William DeVry) watched as Brad held his son for the first time. They got a glimpse of Wiley up close, so it’s possible they’ll notice a difference.

The original Wiley was smaller and had more petite facial features. Nelle’s baby doesn’t look a thing like him, but there could be way around this. If Brad can keep “Julexis” at a distance for a while, his problem should be solved. Babies change a lot during the first few weeks, so a new appearance wouldn’t raise too many red flags.

Julian took some pictures, but Wiley was mostly covered in a blanket. Although Grandpa showed off those pics to Liz (Rebecca Herbst) and Kim (Tamara Braun), they only took a quick peek. If they happen to see Wiley 2.0 soon, it’s doubtful that’d create any suspicion.

Brad’s guilt could be a big hurdle as well. It’s easy to see he’s uncomfortable with all this, but he’s trying to suck it up and deal with it anyway. Brad and Lucas waited so long for this moment. Now that they have a family, Brad will make every effort to keep it.

Even so, watching Michael (Chad Duell) and his family grieve could be tough. Brad will also face difficulties as he deceives Lucas. Trust is a huge part of any solid relationship. Brad’s choosing to break that trust, so that’s bound to eat him up inside. There’ll inevitably be times when Brad nearly cracks under the pressure.

Nevertheless, Brad may make it past those initial problems. There’s a good chance Julian will find out the truth at some point, but he’d certainly keep his mouth shut for Lucas’ sake. General Hospital spoilers say Brad may settle down and finally feel like he’s in the clear.

That’s when a nightmare could unfold. GH has given plenty of hints about the birth mom potentially wanting her child back. It’s been Lucas and Brad’s fear from the very beginning. What happens if the birth mother makes that demand? If Brad believes they’re going to lose the kid anyway, he may expose the truth. At least Michael would be reunited with his son.

However, it’s possible Michael will let Lucas and Brad keep this little one. General Hospital fans will just have to see how it all plays out! We’ll give you updates as other GH news comes in. Stay tuned to the ABC soap and don’t forget to check CDL often for the latest General Hospital spoilers, updates and news.