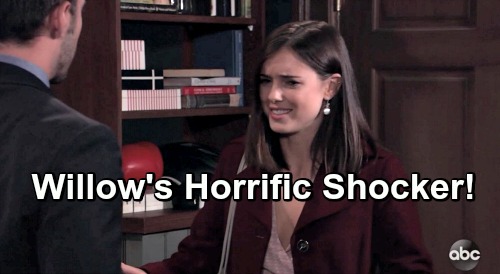 General Hospital (GH) spoilers tease that Willow (Katelyn MacMullen) is hiding some painful secrets. GH has already left fans in the dark on Willow’s reason for attending the bereavement group meetings. However, that should change soon enough. Now that Michael’s (Chad Duell) been opening up, it’s just a matter of time until Willow starts opening up, too.

Of course, General Hospital has offered some big hints about Willow being the anonymous birth mom. Her connection to Michael is a huge one on its own. During Nina (Michelle Stafford) and Willow’s faceoff at the parent-teacher conference, another clue surfaced. Nina asked if she had children, which led to Willow’s outburst. She was offended when Nina tried to act like Willow couldn’t really relate.

That also serves as a hint about Willow being Nina’s biological daughter, but let’s focus on the birth mom angle for now. Willow’s reaction tells us that she most likely gave Wiley up for adoption. Her bereavement group meetings tell us Julian (William deVry) must’ve revealed that the original baby died.

A third piece of the puzzle came through Willow’s date night with Chase (Josh Swickard). Their evening started out on a disastrous note thanks to Chase’s poor judgment. He was hoping to impress Willow with his cooking skills, so he brought her back to his apartment for some homemade shrimp scampi. Unfortunately, Willow flew into a rage and objected to being at Chase’s “lair” on their first date.

To be fair, Chase should’ve just taken her out for dinner and a movie somewhere. It’s easy to see why Willow got the wrong idea. Nevertheless, Willow seemed more agitated that you’d expect her to be. It almost seemed like she’d been burned by a situation like this before.

That serves as further birth mom proof since Alexis (Nancy Lee Grahn) revealed a little about Wiley’s father. She suggested that the dad was never in the picture. Alexis implied that it was a one-time deal, so Willow could’ve been raped. That might be why she was so upset over the Chase confusion and why she ended up giving this kid up for adoption.

Willow will have to fill someone in on all her pain eventually. She grew closer to Chase once they got their date back on track, but Michael seems like a better option here. He’s been through plenty of pain himself, so they’ll remain close as they unite in grief.