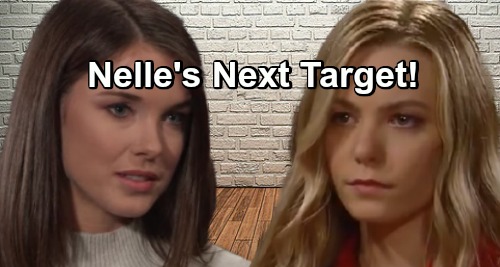 General Hospital (GH) spoilers tease that Michael Corinthos (Chad Duell) and Willow Tait (Katelyn MacMullen) will grow closer. Meanwhile, Harrison Chase (Josh Swickard) will be oblivious to their deepening connection. It seems Chase will be too smitten to notice what’s happening right in front of him.

Despite catching Chase and Willow together a time or two, Chase won’t think he has anything to worry about. He’ll just keep flirting and hope that Willow becomes his girlfriend soon. General Hospital spoilers say a New Year’s Eve kiss will give Chase even more confidence. He’ll hope they’re on the verge of something great.

When he’s not working, Chase will spend every waking moment pondering a possible future with Willow. Unfortunately, Chase probably won’t get one. Willow appears to have a much stronger bond with Michael and that’s only going to get stronger as major “Wiley” secrets unravel.

Willow is Wiley’s birth mother, so that shocker’s bound to come out eventually. Once Michael learns the truth, he may push Brad (Parry Shen) and Lucas (Ryan Carnes) to let Willow visit “Wiley” sometimes. Of course, GH viewers know Willow’s baby is dead. Michael’s son is the one Lucas and Brad are raising, so more revelations are on the way.

The truth about Jonah Corinthos would mean a joyful reunion for Michael and total devastation for Willow. Michael would have a lot to wrap his head around, but he’d have sympathy for this grieving birth mom. Even though Jonah isn’t her child, Willow could form a bond with him if Michael indeed pushes for those visits. It could add to her heartbreak once the real story comes out.

All of this could strengthen Michael and Willow’s connection. They could ultimately decide to raise the baby together, but there’s one person who might destroy their happy family dream. Naturally, we’re talking about devious Nelle Benson (Chloe Lanier)! By getting together with Michael and stepping into the mother figure role, General Hospital spoilers say Willow could make herself a target.

Nelle’s stuck behind bars for now, but prison walls can’t keep a crazy villain contained for long. There may come a day when Nelle beats the system with a top-notch lawyer and a legal loophole. An escape is even a possibility. At some point, GH fans can bet Nelle will return to Port Charles and wreak havoc. Willow may want to watch out for Nelle’s vicious wrath!

Do you think Willow’s setting herself up for trouble? Will Nelle cause dangerous issues in Michael’s next romance? We’ll give you updates as other GH news comes in. Stay tuned to the ABC soap and don’t forget to check CDL often for the latest General Hospital spoilers, updates and news.