General Hospital Spoilers: Why GH Will NEVER do a Jason and Carly Hookup – CarSon Destruction Looms, But No Chance for Jarly 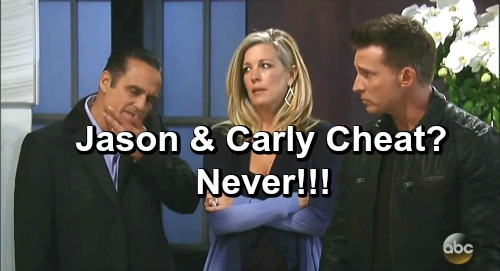 They’re growing closer and Carly can see the writing on the wall. She’s worried this will lead to cheating and if that’s the case, she has no intention of taking Sonny back after the blowup.

Jason Morgan (Steve Burton) will remain caught in the middle of this mess. As Carly’s bestie and Sonny’s (Maurice Benard) right-hand man, he doesn’t want to see their marriage fall apart. Jason clearly cares about both of them a great deal, so he’ll do everything he can to prevent disaster.

General Hospital spoilers say Jason will start by having a heart-to-heart with Sonny. On December 27, he’ll express Carly’s concerns and point out that this is serious business. Jason will likely be blunt and indicate that Sonny could lose Carly forever. She’s been down a heartbreaking road with Sonny too many times, so she’s done opening herself up to pain.

GH fans can expect Jason to deliver a stern warning. He’ll urge Sonny to stay away from Margaux and eliminate any temptation. Even though Sonny doesn’t see this as a big deal, Jason just won’t think it’s a good idea. Carly’s on edge and will be looking for any little sign that Sonny has crossed the line.

Nevertheless, there’s a good chance Sonny will indeed go too far eventually. If Carly keeps her word, we could see a “CarSon” split. Sonny might stick with Margaux or find some other younger, vulnerable woman to support, but what about Carly? What does her romantic future look like?

General Hospital could take this in a few different directions, but there’s one that most viewers don’t want. Carly and Jason had a one-night stand many years ago, but they’re firmly in the friends’ zone now.

They’ve established a sweet bond as pals and it’d be a shame to screw that up. There isn’t any real romantic chemistry between them and that’s been the case for a long time.

Platonic love stories are rare on soaps, but Jason and Carly have built one of best. Of course, we can’t ignore Sonny’s side of this either. That’s another reason why Carly and Jason will likely never head down a romantic path.

Can you imagine how outraged Sonny would be over a hookup or even a relationship? Jason loves both Sonny and Carly too much to ever cause that kind of destruction.

Besides, Jason’s only had eyes for Sam McCall (Kelly Monaco) since he returned to town. He hasn’t so much as looked at another woman lustfully. Jason adores Sam and seems content to wait on her love until the end of time.

They’re slowly inching toward a reunion, so Jason should hang in there and hope it pans out. A “Jarly” fling hasn’t and probably won’t ever cross his mind in the coming months.

Instead, Jason may try to pick up the shattered pieces of Carly and Sonny’s marriage. He’ll undoubtedly be rooting for them despite their issues. General Hospital spoilers say more excitement’s ahead, so stay tuned. We’ll give you updates as other GH details emerge. Stick with the ABC soap and don’t forget to check CDL often for the latest General Hospital spoilers, updates and news.