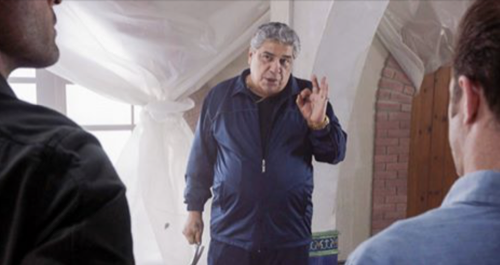 Tonight on CBS Hawaii Five-0 air with an all-new Friday, January 12, 2018, episode and we have your Hawaii Five-0 recap below.  On tonight’s Hawaii Five-0 season 8 episode 15 “He puko’a kani ‘aina (A Coral Reef Strengthens Out Into Land)” as per the CBS synopsis, “McGarrett and Danny investigate the murder of a private detective whose client was killed the same way, and Adam sends Jessie into a dangerous situation with disastrous consequences. Also, Danny’s uncle, Vito, comes to town to help Danny and McGarrett get their restaurant up and running.”

Danny’s Uncle Vito came to town to help him and McGarrett with their restaurant on tonight’s all-new episode of “Hawaii Five-0” however the man may have been more than they bargained for. The older man had a “Jersey” sense of humor and thought his jokes about murdering people was funny. Also, Uncle Vito thought he had been brought on to help the restaurant by committing a crime. He had wanted to set fire to the place and had told them that he could make it look like an accident. He said that he could sell it to the inspector as faulty wiring and rats and there wouldn’t a problem as long he was the one talking to the inspector.

Except the guys didn’t want him to burn down their own restaurant. They knew that most restaurants failed within their first year and so they brought in Uncle Vito to ensure that such a thing wouldn’t happen to them. The guys asked Vito to help them cut costs with construction by doing some of the work for them and so Vito reluctantly agreed to help. He still didn’t think the place was going to make money without some creative business decisions and that was his way of helping usually had a lot of breaks built in. Vito was back at the hotel bar before long and he was talking up quite a few younger women with one of them especially capturing his attention seeing as she was responding to his lame attempts at flirting.

The woman had laughed at all the right intervals and she hadn’t even gotten offended when he told her a long tale about the first time he met Frank Sinatra. She merely sat there while he finished his story and afterward it had been her suggestion to go up to his hotel room. So while Uncle Vito was falling behind on the one thing he had been asked to do, Danny and McGarrett were getting wrapped up in their latest case. The guys were working on a homicide investigation with their team and they had to figure out why someone wanted a private detective dead. They knew he probably ticked off a lot of people by exposing some cheating so murder seemed a bit much.

The team figured the PI might have caught onto something much bigger than the usual infidelity case and so they checked in with Leighton Prewitt’s last client. His last client had been Susan Kalani and she had hired Prewitt to find her now ex-husband. The ex-husband had disappeared a few years ago and there hadn’t been any sort of explanation for why he left or if he was coming back. She said that she needed to find out what happened to explain to her family meanwhile her in-laws believed Susan was trying to find Micah because she wanted to prove that he was dead. He had life insurance policy that Susan would be allowed to cash the moment she had proof of what she needed.

The in-laws, on the other hand, didn’t believe Micah was dead. They said they were still in contact with their son and that he had left them a message not long ago indicating he had his reasons for staying away. Therefore, the team went looking for where Micah could be based on that message and it turns out that was dead. The message hadn’t been real! His father had simply faked the message because the last time he did see his son was when he turned down Micah on loaning him money. He said he thought he was giving his son tough love in the hope that Micah would stop chasing after dreams and become a little more realistic.

Then Micah disappeared and his father had been too ashamed to tell his wife what he did or let her believe that their son was dead, but after Five-0 was able to write off the fake message, they realized that Micah was probably dead and so they checked into the last few months of his life. He had had a plan on entering the jungle around the same time that another man did and this other man seemed to have suffered a mental break afterward. He had been hospitalized for severe PTSD and the team figured he must have seen something while he was out there.

Now Greg Isaacs was so out of it that it was hard to get him to open up and so all they knew was that Micah had been with him and that both men were wearing these string bracelets. Tani later found out those string bracelets were part of this self-help program that was created by a man calling himself Kundahara. Kundahara claimed he could open up their minds and that each level of the program brought them closer to success yet the bracelets both men had been wearing the last time anyone had seen them had meant they were coming towards the bridge phase. That’s when they got to go towards Kundahara’s private facility out in the jungle. And not long after the men were supposed to get there, Isaacs was traumatized and Kundahara scrubbed all mention of his program from the internet.

Therefore, something must have had happened. The team geared up and went out there believing they were coming across a cult though luckily Kundahara’s followers were willing to put down their guns one of them had actually gotten shot. These people weren’t warriors or a militia group. They had picked up guns because they had fallen under the sway of a charismatic leader and so they quickly turned on said leader once they were finally released from that compound. They told Five-0 that Prewitt had gotten killed for finding out their leader had killed Micah. Micah had apparently come to his senses after he passed “the bridge” and had seen that Kundahara couldn’t help him with his personal or his business.

Micah had just wanted to become a success again and support his family, but Kundahara and had killed him for exposing the guru for the fraud that he was so knowing the truth helped everyone heal. It brought closure to Micah’s family and his parents made peace with his ex-wife because that was what was best for everyone. So the guys had finished with their case and they had gone back to the restaurant to find out that Uncle Vito had managed to get everything off their lists without spending a penny over the budget. The only mistake he made was the statue they didn’t like and realized they couldn’t return.

But what they didn’t know was that a woman had robbed Vito back at his hotel and that he had had to take back everything she bought to get his money back so the statue had actually been her mistake.

She bought it without knowing she couldn’t return it.