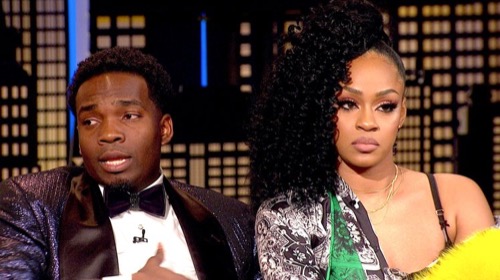 Tonight on VH1’s hit series Love & Hip Hop returns with an all-new Monday, March 12, 2018, episode and we have your Love & Hip Hop recap below for you.  On tonight’s season 8 episode 18, “The Reunion Part 2,” as per the VH1 synopsis, “During a discussion of everything that went down in St. Maarten, Jaquae finally picks sides in the Bri vs. Kiyanne beef, plus Anais declares that she has no shame in showing off her goods.”

This week on part 2 of the Love and Hip Hop New York reunion the situation between James R and Snoop kicks off the show. Nina quickly ends the fight and moves on to deal with the situation with Ashley, Navarro and Anais. Nina starts off congratulating Ashley on her pregnancy. Ashley reveals that she is six and a half months pregnant. Nina asks Ashley about her relationship with Anais. Ashley says “We don’t have a good relationship. The last time we spoke was nasty.” Nina asks her what it was about and Ashley reveals that it is all about her sister. The conversation quickly breaks down and Jonathon speaks up and tells Aisha “I know all about the married men you deal with.”

It gets even more heated from there and Nina steps in. She asks Navarro “Are you willing to set a stricter boundary if Anais is not willing to change?” Anais says “Ya’ll better put on your raincoat if you don’t want to get wet because I’m about to make it rain!” Nina asks Navarro “Are you going to set stricter boundaries knowing that Anais is not going to change her behavior?” Navarro tells her “Absolutely. She’s going to send the pictures to Ashley instead of me now.” Remy speaks up and says “If you have your husband sitting next to you and saying that he is going to keep this woman as a client knowing that she won’t change her behavior then your problem is now with him, not her.”

When the reunion returns we get ready to deal with Mariah, Safaree and Dream. Nina asks Dream “Did you post another man on National Boyfriend Day?” Dream says “I did. I was being petty because he was being petty.” Nina asks “Have you seen each other?” Both of them say that they haven’t seen each other. Nina asks them “Can you two be friends because it seems like you were really close?” They agree to be friends.

Nina moves on to talk to JuJu. She asks JuJu “Why didn’t you post things about your relationship online?” JuJu says “I’m just a private person.” Yandy talked about how she and Mendecees admired JuJu and Cam’s relationship and she felt sad that they didn’t make it. Safaree says that he admires JuJu and he felt like they had a lot in common. Nina asks JuJu “How did you feel about Safaree?” She tells Nina “I was not in the mood for a relationship and I thought Safaree was a player, but the more I got to know him the more sides I saw of him and we are friends now.” Nina then asks if she is ready to date. JuJu says “If a man is going to come into my life he has to come correct or not come at all.”

When the reunion returns they show a previously unseen clip between Mariah and Safaree. Safaree and Mariah seem confused about the incident. Nina asks “When did this happen, before or after you and Dream made up?” Mariah says “Originally it was done to be petty toward Dream, but I genuinely got to know Safaree as a person and I like him as a person.” Safaree says “I’m trying to find myself!”

They move on to talk about the trip to St. Martin. Nina asks Yandy what it was like on the island when they landed. Yandy talks about people working, houses with no roofs and kids going to school. Nina asks Yandy “Were you upset that Anais was on the trip?” Yandy says “I always felt the more hands the merrier, but Anais could get a little crazy. I could balance out crazy.” Nina asks JuJu “How did you feel about Anais approaching Yandy?” JuJu says “I didn’t think it was an appropriate time or place. She could have waited until we got back to the villa to do that.” Anais speaks up and says “I don’t care. If I have something to say I’m going to say it.” JuJu tells her “That could end up very badly. You were lucky that Yandy walked away but had you said something like that to me I might’ve reacted very differently.” Nina asks Jonathon “How did you feel about Anais’ behavior?” Jonathon says “I felt embarrassed because I vouched for her and she was acting out.” Anais says “I felt like you were taking Yandy’s side over mine and I wanted my friend back.” Nina asks her “Were you acting out to get Jonathon’s attention?” Anais says “I just wanted my friend back.”

When the reunion returns Jacquee and his love life are on the hot seat. Nina asks Kiyanne “Where did your issues with Brittany start?” Kiyanne says “Don’t nobody know.” Bre jumps up and says “It’s about time you admit that.” Kiyanne tells her “Shut up.” Nina asks Jacquee “How do you feel being stuck between your girl and your friend?” Jacquee says “I haven’t spoken to Bre in a while, but at the end of the day I am on my girls side.” Nina then asks Kiyanne “Did you feel like he was playing you when he tried to apologize to you and you spotted his friends in the park?” Kiyanne says “Yes. I absolutely did.” Nina asks the group why they were in the park watching. Safaree speaks up and says “We had to make sure he was going to be ok.”

When the reunion returns they move on to deal with the drama surrounding Safaree’s song remix. Nina asks Yandy “What was your role in the remix?” Yandy says “We were just gonna do this and raise money. I just wanted an executive producer credit.” Nina asks Safaree “How did you feel about Yandy?” Safaree says “I don’t like conflict so I go behind their backs and talk to people who are close to them.” Nina asks Brie “How did you feel about being left off the record?” Brie says “I was traveling and I still made time to do the verse.”  She goes on to say “I was told to send it to Jacquee and that was what I did. When I heard his girlfriend, who I was beefing with, on the track I thought it was sabotage.” Kiyanne speaks up and says “My verse was hotter than yours that’s why I replaced you.” Brie tells her “Shut up puppy. No one is talking to you before I walk you.”

When the reunion returns Nina asks Rich how he is doing with his Diabetes. Rich says “I thought it was important to bring awareness to this disease and have people listen to their bodies. I’m doing well and I am almost back to 100%.”