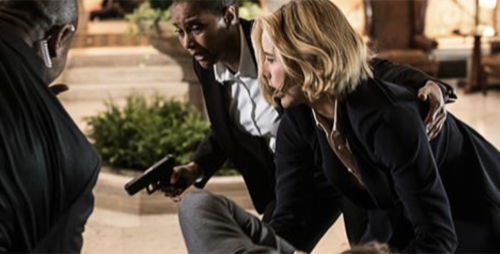 Tonight on CBS Madam Secretary airs with an all-new Sunday, April 29, 2018, season 4 episode 19 called, “Thin Ice” and we have your Madam Secretary recap below. On tonight’s Madam Secretary episode, as per the CBS synopsis, “Elizabeth is attending a summit in Montreal to resolve territorial claims of the North Pole when an activist group detonates a bomb and she can’t locate Jason and Piper. Also, things take a turn for the worse when Elizabeth learns that Russia was involved in the bombing, and Henry helps one of his students work through a difficult decision.”

Liz gets ready for her trip to Montreal. Meanwhile, Blake is spreading his wings by getting involved in policy making under the supervision of Kat. He is upset that there funding has been cut and they need to suck up to an oil magnet for the World Expo pavilion to generate green jobs.

In the meeting, Mr. Harding tells Blake he needs to nix the natural gas. He wants nuclear power. Blake is annoyed. After the meeting, he rants to Kat.

Henry is teaching his students about war crimes. Meanwhile, Jason and his girlfriend have traveled with Liz to Montreal. Outside their hotel, there are demonstrations going on involving the North Pole, climate change and Canada’s latest declaration that they have rights to the Arctic because one of their sunken ships was recently discovered.

In the meeting, Liz suggests that they investigate the arctic bed before anyone gets to stake a claim. They call a recess. Out in the lobby, Jay and Liz are talking when an explosion occurs. Liz runs to find Jason. The secret service stops her.

They secure Liz in the stairway. Jay figures out that Jason is in the hotel on his phone. She rushes out and runs to his room, banging on the door. He opens in his robe. She peers in. Piper is in there, Luther Vandross is playing. There are flowers. She leaves the room embarrassed. Outside, Jay tells her the summit has been canceled.

They head home. Liz tells Henry she cannot believe this has happened. Jason runs upstairs. Henry is upset as well about his rock star student who has turned in a paper he plagiarized.

Jay calls Liz. Russian assets were behind the explosion at the summit.

Liz and Kat meet with a Russian official over Skype. He denies all wrongdoing and tells her that his country has a right to the Arctic.

Henry tracks down his student Andrew in church sitting by himself. He tells Andrew that he turned in that paper on purpose and he wants to know why. He explains that he cannot kill and he wants to tell his mother, a national security advisor, but she wouldn’t understand. He wouldn’t be able to live with the guilt if he took a life. He would rather her think he had a lapse in judgment.

Blake presents his redesign of the climate change policy. She is impressed. They watch an activist named Bella Rossi be released with the help of Jay. Harding calls. He tells Liz he isn’t happy Jay helped her. Liz tells him she no longer wants his sponsorship.

Andrew’s mother comes to see Henry. She wants him to change Andrew’s mind about ending his career as a fighter pilot.

Liz and Henry sit down with Jason. He finally apologizes. Liz gets called to an emergency meeting. Dalton tells Ellen and Liz that things are bad. Russia has sent the military to the Arctic to occupy the area and make a claim. Liz calls Minister Chen for help. He makes her beg. He wants in on the Arctic Council. She agrees.

Dalton, Liz, and the others head to the situation room. Dalton tells his men to fire a missile across one of the Russian vessels’ bow. Dalton orders a retreat when the Russians stay put but then change their mind and back down.

Liz and Dalton sit and have a drink. She wants to revisit the nuclear power policy. The next day, Liz and the team meet with Bella Rossi to ask her to be the phase of their new campaign.

Henry sits in front of the board to support Andrew’s decision leave his post. Meanwhile, Jason comes home upset. Stevie comforts him after he shares that Piper broke up with him.