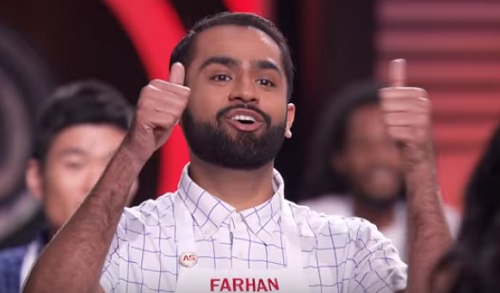 Tonight on FOX Gordon Ramsay’s Masterchef  continues with an all-new Wednesday, June 27, 2018,  season 9 episode 7 called “World Dishes,” and we have your weekly Masterchef recap below.

On tonight’s Masterchef episode as per the FOX synopsis, “The contestants face a mystery box challenge where they must create a dish using one common ingredient—walnuts. The winner will receive three huge advantages. Later, the kitchen welcomes American soccer legend and Fox Sports soccer analyst Alexi Lalas, who will introduce a street food-themed elimination challenge that involves popular food among soccer fans in various countries.”

Nineteen of the most talented home cooks in America were left on tonight’s all new episode of “MasterChef”. However, the first challenge they faced tonight was a mystery box. Everyone knew that a mystery box could either make them or break them because this one ingredient inside this mysterious was something that had to be the highlight of whatever they cooked. They couldn’t just toss it on top like a decoration. It had been to be in the taste as well and so everyone lifted the lid on their mystery box challenge hoping that whatever was inside wasn’t too bad. And instead they found out they were going to be cooking with one hard ingredient because it was walnuts.

Walnuts have a bitter taste and that’s why they are more often than not are used in deserts or pastries because the sweetness in the other ingredients cuts down on the bitterness, so not that surprisingly a lot of people instantly came up with something sweet to make with the ingredient. People were thinking cupcakes and candying their walnuts. One of the few that wasn’t making a desert was Bowen. Bowen had never cooked with walnuts before and so he chose to add walnuts to a dish he already knew how to make by heart. He created Pork Shrimp Walnut Dumplings with Miso Chicken Stock and later on it was the first dish the judges chose to judge.

The judges said they all enjoyed the spell of the Miso and they loved the creative behind Bowen’s fusion dish. They all loved it and so if there was a criticism then it was that the Miso soup could have been lighter because the broth was quite flavorful. The next dish that the judges called up was Samantha’s. Samantha made Potato Gnocchi with Walnut Pesto Sauce and the judges loved it. They didn’t think she could gnocchi in such a short time and she proved them wrong because all the judges found it to be light and fluffy. The only negative about the dish was that it didn’t look visually appealing. They thought Samantha could have done more when she was plating.

The last dish the judges called was Cesar’s. He made Banana Walnut Pan Dulce with Grated Corn and Citrus Basil Crème Fraiche and again it was delicious. The judges enjoyed the taste though they differed with their criticism. Joe Bastianich said the dish could have used some green on the plate just to make it pop more and Aarón Sanchez felt a little more citrus could have been added to the dish. The judges had needed time to debate amongst themselves which dish they enjoyed the most and they ultimately went with Cesar’s because he did impress everyone with his plating skills. And with winning the mystery box challenge, Cesar was able to pick the next challenge.

Cesar was given the choice of three different street foods that could be cooked at World Cup and he chose to go with Aarón. He ensured the rest of the group had to cook churros with chocolate sauce. He said he knew that it was the hardest dish there because everyone thinks its easy until they have to cook it. Except Cesar also got an added advantage because he could save ten people and so he saved ten though made sure Bowen still had to cook. Bowen was the target of this challenge and Cesar didn’t bother to hide it. He said he would like to see if Bowen could move away from what he knows and execute something that was culturally different.

Bowen dreaded cooking the churros and surprisingly he wasn’t the one that was the most affected by this challenge. It turns out there were plenty of victims because of this challenge. Taylor for one tried to melt the chocolate and it was coming out too thick so she had to restart it. Then there was Samantha who made her dough extra thick by hand because she was using her Italian style of doing things and Bowen was very much a victim of this challenge because he thought he could treat churros like salty dough. Salty dough is something Bowen was used to frying twice and so he burnt up his churros by trying do that.

Shanika also made a mistake because she undercooked her churros and another person who made a crucial mistake was Alecia. Alecia was showboating towards the end and she kept dipping her churros in sugar and so that ruined the dish for everyone who tasted it. The judges loved churros from Julia, Juni, Matt, and even Taylor’s. Taylor had gotten a nice cook on her churros and they didn’t look visionally unappealing like Samantha’s or Bowen’s. The taste was thankfully there and so that later saved Samantha when she ended up in the bottom four. The bottom four was Samantha, Bowen, Alecia and Shanika yet Samantha and Shanika’s hadn’t been that bad.

Plus, the judges still thought Bowen tasted nice even if it didn’t look it and so they ultimately chose to eliminated Alecia.

Alecia had actually disrespected everyone when she showboated like that because it made it seem like she was playing around, so even the others up on the balcony agreed that Alecia should be eliminated.