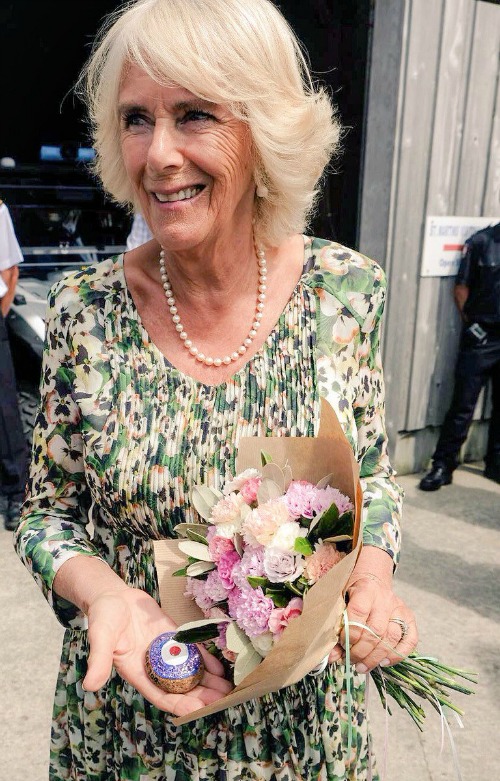 Meghan Markle is growing close with Camilla Parker-Bowles. In fact, many media outlets have noticed that the two royals have been wearing identical cross bracelets during their royal engagements and public appearances, which probably means that they have more than just their taste in jewelry in common.

Ever since her royal wedding to Prince Harry, Meghan has been getting along more and more with her step mother-in-law, Camilla Parker-Bowles. The two women looked very comfortable with one another at Prince Charles’ 70th birthday party and were even spotted looking close at the Royal Ascot earlier this summer.

It’s safe to say that Camilla has either taken Meghan under her wing or simply wants to help her transition into her new life as a member of the royal family.

And now it’s emerged that the two women are even wearing the same piece of jewelry: a diamond cross bracelet on their wrists. The 18-carat white gold sparkler is meant to signify Meghan’s baptism into the Church of England and is very similar to the one that Camilla often wears in public, too.

For many royal critics and observers, Camilla Parker-Bowles and Meghan Markle’s friendship isn’t surprising at all. After all, Camilla was always considered the outsider of the British royal family. Meghan might be feeling the same way, especially considering that she wasn’t born in Britain and that she is a former Hollywood actress who never had any ties to the monarchy while growing up.

Plus, it’s also been noted that Prince Charles’ wife could definitely use an ally within the family, and Meghan Markle just seems like the perfect candidate. While Camilla and Kate often look very distant with one another whenever they are in public, it’s the opposite with Meghan. She’s made quite an effort to get along with everyone.

As a matter of fact, even Queen Elizabeth reportedly enjoys being in Meghan’s company, as she finds her to be very intelligent, well-spoken, warm and passionate about her new role as a royal. Seeing how Kate Middleton hasn’t really given Camilla Parker-Bowles a chance to become close to her or her family for that matter, Meghan might be the daughter-in-law that she’s always hoped for and wanted. Time will only tell if they will continue to be close, especially once Camilla becomes Queen Consort.

In the meantime, don’t forget to check back with CDL for all the latest news and updates on Meghan Markle, Camilla Parker-Bowles, and the entire royal family right here.