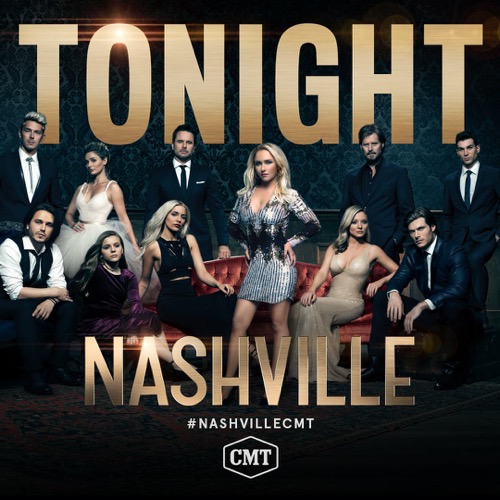 Tonight on CMT Nashville starring Hayden Panettiere returns with an all new Thursday, January 4, 2018, season 6 episode 1  premiere called, “New Strings,” and we have your weekly Nashville recap below for you. On tonight’s Nashville episode, as per the CMT synopsis, “In the Season 6 premiere, after a public meltdown, Juliette seeks to change her life from an unlikely source; Scarlett and Maddie take a trip; Maddie meets Jonah Ford, a famous pop star; Scarlett struggles to find herself.”

Deacon, Scarlett and the girls get together in the living room to take a Christmas picture. Bucky calls. Maddie has been asked to sing at a Hunger benefit and for MTV on New Year’s Eve.

Juliette is having a break down over her album cover. Avery thinks they should bump out her tour. Her manager is about to answer when Juliette tells everyone in the room to get the hell out. She throws herself into her chair.

Gunnar and Will are playing basketball. Gunnar is worried about his upcoming gig. Will reassures him he will be fine. They head to Juliette’s show. Will runs into Zach. It is uncomfortable. Will brushes it off, telling Avery he is fine.

Juliette takes the stage at her big performance. She begins singing Is Anybody Out There. In the crowd she notices people holding signs, calling her a backstabber. She is no Rayna. She stops singing and asks them why they want to ruin the show. The yell out that she is fake and unoriginal. She tells the crowd that she is very real, too real and wants what everyone else wants, to be loved. She doesn’t think she can do this anymore. She walks off stage.

The next morning, Juliette is all over the news for her performance the night before. Avery brings her breakfast in bed. She wants to cancel the NYE party. Avery asks her what is wrong. She just wants to be left alone. He wants them to get away.

Will shows up at Scarlett’s. They talk about Juliette’s meltdown and Gunnar’s new gig coming up.

Maddie is packing while Daphne goes over the NYE performance list. Daphne is star struck by the list. Scarlett shows up. She is chaperoning Maddie on her trip. She tells Deacon he needs to get back out there and have fun on New Year’s Eve.

In North Carolina, Avery and Juliette sit on their bed. They finally got away. Juliette just wants to take a nap. She sleeps the entire day away and wakes up at 2 am. She heads to the lobby. A man sits next to her. He knows who she is. He asks her what brings her here. She is sarcastic and dismisses his questions.

Will is practicing with Gunnar and the rest of the band. Gunnar is having a hard time without Scarlett. She isn’t sure he can do this upcoming gig. Will gives him a pep talk. He is great at what he does. He just needs to get out there and do it. Gunnar smiles.

Maddie and Scarlett arrive at the event where she sees singer, Jonah Ford. Girls are all around him. He is signing paraphernalia. He smiles Maddie’s way. Later, Maddie takes the stage after Jonah introduces her. He watches her performance with a big smile. She gets off the stage and he finds her. He is the reason she is there. He suggested she be added to the lineup.

Juliette is watching TV, trying to fall asleep. She sees the man who was in the lobby on TV. He preaches about depression, addiction, and control.

The next day, Scarlett walks through the sunny streets of LA. She sees a duo singing together. They remind her of her and Gunnar. She begins to cry. She calls Deacon who has Daphne sitting in front of him. She wants to know if he is lonely. He tells her he is fine.

Glenn tells Juliette and Avery he got a phone call from a man named Darius from The Movement for Coherent Philosophy at 2 am. He wants to help Juliette. She thinks it is odd, but she knows who he is talking about.

Maddie heads down to the studio to meet up with Jonah. He isn’t there. She gets a text. He cannot make it but he wants them to catch up tomorrow. She texts back that she cannot make it.

Juliette and Glenn sit down and call the man. He wants to talk to Juliette not Glenn. She takes the phone. He wants to help her. He sees she is in pain it has nothing to do with her celebrity status.

Deacon runs into Zach. They chat until Brad shows up. Brad has a chuckle at Juliette’s breakdown on stage. Brad’s date wants to meet Deacon, Brad doesn’t know why. Deacon tells him he will stop by his table.

Maddie and Scarlett sit in their hotel and eat ice cream. They talk about Jonah and Gunnar. Maddie just wants to go home.

Juliette drives to meet Darius. She enters his office and waits for him. He arrives. They sit and talk. He can help her overcome her need to be loved by everyone. He can give her control back but first, she needs to give her control up. He asks her if she is a good mother. “A damn good mother,” she tells him. He tells her he will ask again and she needs to count to 10 before she answers. She does as tears stream down her face. He tells her he wants her to count to 10 before she answers anything, feel the anger.

Maddie runs into Jonah. He hands her flowers and offers to take her home. They can have dinner first. She accepts.

Juliette arrives at a local radio station for an interview. Glenn reminds her to just deal with the questions and chalk it up to a bad day. She begins her interview and is bombarded with a string of negative questions. She starts to snap back but then counts to 10. She shares that she suffers from depression. It has been really bad lately. She needs to postpone her tour until she gets it under control. Glenn and Avery look shocked.

Maddie and Jonah have a romantic first dinner while Will joins Gunnar up on stage to make him feel better. Maddie makes it home on time. She and Scarlett and Daphne surprise Deacon close to the countdown to a new year. Juliette calls Darius to tell him she is ready for his help.