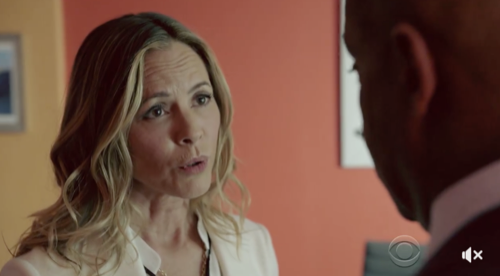 Tonight on CBS NCIS returns with an all-new Tuesday, January 9, 2018, season 15 episode 13 called, “Family Ties” and we have your weekly NCIS recap below. On tonight’s NCIS season 15 episode 13, as per the CBS synopsis, “After McGee and Torres visit the home of a high schooler who witnessed a hit-and-run, her parents, Christopher and Julie Bell, flee with their daughter, leaving NCIS in the lurch. Also, Vance’s daughter is arrested for shoplifting.”

Gibbs was forced to cancel his breakfast plans on tonight’s all-new episode of “NCIS” when the body of a corporal was founding floating by the road.

But Director Vance had been disappointed about breakfast. His daughter had him on a morning shake routine that could never replace eating actual solids and so he looked towards breakfast at the diner as his one escape from that routine however he knew why Gibbs had canceled and would have left Gibbs to do his work if his daughter hadn’t gotten into trouble. Kayla had gotten arrested for shoplifting. She had ditched school to go the mall and had stolen some merchandise that was later in fact found in her purse. So Kayla did do it!

Kayla had even admitted that she did it. But what she hadn’t confessed was that her father was Director Vance. If she had then maybe the police or possibly the store could have cut her some slack, but she hadn’t said anything and the store had pressed charges. So it was the police that figured out who Kayla was and unfortunately, they were the ones that notified her father. The Director had thought Kayla was still at school when he got the call and he had been shocked because shop-lifting hadn’t sounded like his daughter.

The Director thought that Kayla was serious about her health and especially school because it was her last year. But the Director admitted to Gibbs that he didn’t know what to do with Kayla. She was a good kid when she was a younger and she used to talk to him yet things change when she became a teenager because she found outside influences and so the Director had wanted to stay at the office. He hadn’t wanted to go home because he knew he would have to have a conversation with Kayla and had wanted to put it off as long as possible. So Gibbs had to convince him to go home.

Gibbs could put work first because he had nothing to go home to. But the Director was different and so Gibbs couldn’t let him hide at the office. He convinced the Director into leaving work early and then handle his case. He and his team had quickly found out that their victim, Lance Corporal Jenkins, had ended up in the water after someone had run him off the road. So they had used the broken headlights to tracking down the car and they found John Kendall though Kendall couldn’t have possibly have driven his car that night.

The Blue Maserati was outfitted with a breath analyzer because Kendall had gotten into a few DUIs and so he couldn’t have possibly taken his car out on the same night he had twelve drinks at the bar. But Abby dusted the car and, while she couldn’t find fingerprints, she did find a bracelet. The bracelet had the mascot of the local high school on it and its initials matched only one girl – Genevieve Bell. She was a straight A kid and seemed well-liked, but the team knew that they had to talk to her because she was either driving the car or was a witness to a vehicular manslaughter.

But the team thought they could find Genevieve at home. It was after school hours and so they thought she was probably doing her homework however they went to the house and her parents said she wasn’t there. They said their daughter stays late at school for volleyball practice and so the father agreed to drive over there because he said it wasn’t that far away. So the guys thought they would meet with the father and the girl at the school and it turns out they were mistaken. They got there and both father and daughter were gone.

The guys had been had. The father had gone to the school to take his daughter and the whole family had escaped before the agents could return to the house. But why did they run? That’s the question that bugged the team because it had seemed extreme for the whole family to go on the run even if Genevieve had been driving that car. So they questioned her best friend Maya Guzman because Maya had been with her that night and it turns out Maya had been the one driving that car. She had been seen in security footage from the convenience store the girls had driven to and it driving a stolen car must have been Maya’s idea as well.

Maya was the one that lived the next door to Kendall and so she thought it would be a great idea to take the car because Kendall left not only the garage door open, but he also left the keys in the cupholder. But Maya was willing to confess that she drove the car and so that didn’t explain why the Bells went on the run. It was just unexplainable until Gibbs took a second look at the family photo. The parents had blue eyes and their daughter had brown. So the odds of that were nearly impossible and Gibbs asked Abby to run a DNA test on the family’s toothbrushes.

The later results revealed that the Bells were genetically related to Genevieve and the fact there wasn’t an official adoption showed that the Bells kidnapped their daughter. But when they found out who Genevieve really was, they learned that her biological mother had overdosed not long after she was born and that her father had been in prison at the time. So the Bells who knew Genevieve’s biological mother had gone to kidnap the baby because they hadn’t wanted her to go into the system and they couldn’t formally adopt her because the dad had an assault charge from when he was eighteen and had gotten into a fight at a Metallica consent.

So finding the family had been easy though choosing what to do with the parents had been the hard part. They hadn’t lied to their daughter and had told her why they had taken her. But they did kidnap her father and biological father wanted to sue the Bells. He hadn’t cared to look for his daughter and so the only reason wanted to sue was to get some money out of the couple. And the team figured out the best way to stop him from doing so was having Genevieve talk to Martin Curtin because she was the only one that could convince him to let her go.

If he sued then he would be pursuing custody. But Genevieve loved her parents and she wanted to stay with them. So she talked to Curtis and he officially signed the papers relinquishing his custody to the Bells because he realized that was what was best for her. And while the whole thing had been a trying time for everyone involved, the Director realized his daughter had taken the fall for the robbery at the mall because she had been taking the blame for her friend. The same friend that was eighteen and had two strikes on her record so the Director decided to go easy on Kayla because she was still a good if the misguided kid.