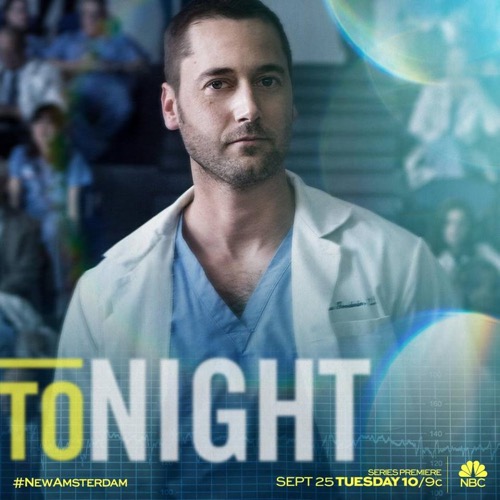 Tonight on NBC New Amsterdam premiere with an all-new Tuesday, September 25, 2018, season 1 episode 1 series premiere called, “Pilot,” and we have your New Amsterdam recap below. On tonight’s New Amsterdam episode as per the NBC synopsis, “The premiere of the drama about a new medical director, Max Goodwin, at America’s oldest hospital. He sets out to tear up the bureaucracy and provide exceptional care.”

New Amsterdam Season One debuts tonight starting with a nasty carbon monoxide poisoning from a faulty furnace causing FDNY and EMT going into overdrive, rushing patients to the “Dam”. Alain (Jason Kisare) stops a cab demanding to be taken to New Amsterdam hospital. Dr. Max Goodwin (Ryan Eggold) arrives at work as the new Medical Director. The staff in the change room have no idea who he is making fun of him, thinking the new guy won’t last a year, but having no idea he doesn’t speak Spanish. He hands the janitor money, saying he will take the odds against him.

Dr. Lauren Bloom (Janet Montgomery) is about to declare a patient dead but calls for equipment, telling the nurse at least he didn’t kill her twice.

Dora takes Goodwin around the hospital, but he tells her he knows the history. They are greeted by Dr. Hana Sharpe (Freema Agyeman), but it doesn’t get off to a good start when he tells her that unlike the previous Medical Director he actually wants her to practice medicine at the hospital because that is her job. She tells him he is funny as he can’t afford her nor make the money she does on her talks and she will be back next week and they will do lunch at the tavern then as her treat. She brushes past him and leaves New Amsterdam. He tells Dora that he likes her and she comes with that, they should keep her!

Max sees the news of the gas leak at United Nations and makes a call, telling Georgia he should have put her and the baby first and promises to win her back. She reminds him that he has 12 weeks. Dora calls him and he has to go. Dr. Sharpe sits beside Dr. Floyd Reynolds (Jocko Sims) suggesting they grab drinks later but he declines. Dr. Iggy Frome (Tyler Labine) sits down beside Dr. Anil Kappor (Anupam) when Goodwin walks in.

He shares that he and his sister were born there, but 8 years later his sister, Luna died there; so working and saving someone’s sister and daughter is a dream for him. He wants to know how he can help, but everyone is reluctant to answer. So he asks everyone who works in the cardiology department to raise their hands when they do, he fires them; saying any department who places billing above care will be terminated!

Next, all the Department Chairs are told to raise their hands and tells them he is hiring them 50 new attendings because untrained residents will no longer be running this hospital regardless of how much their universities make off their servitude or how much it can afford them to play golf. Lauren Bloom wants to get rid of their waiting room completely, put patients direct to bed and he agrees. Iggy is from psych and he simply wants food in the hospital; again he agrees. Max encourages them to get into some trouble and be doctors again! He asks Dr. Bloom to stay back asking her to do a throat biopsy on him before she leaves the room.

The waiting room is filled with patients as Alain walks up to the desk, but is told to wait. Max keeps talking about what he has to do next but the Dean of Medicine keeps calling. Lauren suggests doing this later, he learns it might have been a mistake to fire all the cardiac surgeons when he still had the patients from Rikers coming in. Lauren suggested all the surgeons were corrupt except for Dr Reynolds.

A distraught psych patient, Jemma (Lizzy DeClement) comes to see Dr. Frome and he rushes to see her before security is called. Max goes to Dr. Reynolds office as he is backing up. Floyd says he doesn’t need a pat on the back on the way out. He defends his actions, saying there are other ways of helping people than cutting them open. Max unfires him, saying he wants him to run the cardiology department, suggesting he builds a good one! Floyd says the system is rigged and they won’t let him do it. Max says help him help as many as they can until the system stops them.

Iggy talks to the social worker, saying he is keeping Jemma for the next two years in order to keep her out of foster care as she has been abused enough. Max visits Dr. Anil Kapoor’s patients, who says he is just taking an interest. He informs his patient’s husband that her brain convinced the heart she is dead even though she is very much alive. He says they need to talk about their entire life as it has everything to do with this.

Alain collapses at the nurse’s station and is rushed in, but Dr. Bloom stops them when they realize he came in from Liberia and has all the symptoms of malaria, TB or Ebola. She quickly calls Dr. Goodwin. They need to contact the Mayor’s office and CDC as the patient is put in a pressure chamber; Max explains all procedures.

Dr. Kapoor talks to his patient Ms. Martin who is now awake, he keeps talking to her as Max continues to deal with all the patients from the UN. Lauren welcomes back Floyd, giving him a patient chart from Rikers. He tells Lauren that he thinks she is great but prefers them as friends and colleagues, he can’t see where it would go between them because she isn’t black and walks away from her.

As the patients are going to their rooms, Jemma doesn’t want to give up her journal when up, and security is forced to secure her. Max asks her why and she says she got it from Dr. Forme when she was 10 and it is the only thing that is hers. Iggy asks Jemma what she wants to happen and she tearfully says no one has asked her that before. She doesn’t want to stay at New Amsterdam and when he asks if she wants to go back into foster care she tells him to decide since he’s going to anyways and runs off. Max tells him if he can’t help her as a doctor; help her as a human being and he is allowed to do that now!

Dr. Kapoor’s nurse runs to him saying she believes he is going to kill his patient. Dora arrives with Detective Rose from NYPD and FBI Agent Ratton for his patient with Ebola. Apparently, they have a video made by ISIS revealing they sent a follower to NYC infected with Ebola; their patient is now a terror suspect. Alain explains his side of the story, Max believes the boy was tricked and they say they will look into it.

Lauren confronts Floyd on what he said, but he says he has a plan and it would be a betrayal to his mom and sister if he planned a future with a white woman. Lauren reminds him that clearly, he is “taking one for the team” but she loves black women too, but the obvious thing is, no black woman is asking him out for a drink!

Hana is surprised to be back at New Amsterdam and not at JFK. Max greets her at the care of asking why she would rather give lectures to semi-retired physicians than actually provide care to patients? He tells her to come back in 48 hours or not at all!

Iggy meets with Blanca (Nathalie Carvalho) in the park and hands her Jemma’s journal. He reveals that Blanca’s mom, Camila was the first foster mom to really make Jemma feel safe to grow and be a kid and after she died; Jemma wrote pages and pages about her. Blanca had no idea her mom took in foster kids as she was tough to raise and left home at 16. He thanks her for meeting him, but wants to leave the journal with her so she can see her mom’s love didn’t go to waste.

The Martins are shocked to learn about the tumor as Max explains she is welcome to stay there but the treatment is far worse than the disease. She wants to go home to see her parents and girls, as she hasn’t seen them in 11 years, but Max learns they crossed the border illegally and if they go back they will be arrested. Max finds their Ambassador and asks him to repatriate them.

Alain rips out his oxygen tubing as Lauren rushes to get her suit on, she ignores protocol and goes in without her helmet when he falls to the ground. There is too much blood so Max tells her adrenaline first, oxygen after. She needs to listen to him, as she hasn’t dealt with this kind of virus. Just as Max tells Lauren her glove is ripped and she has blood on her exposed skin, Georgia calls Max and tells him there is something wrong with the baby and she is bleeding.

Georgia is rushed in for an ultrasound with max at her side, they learn the baby is in distress and if they can’t control the bleeding they will have to do an emergency c-section. They cannot find the baby’s heart rate; for a moment they hear nothing but suddenly they do and reveal the baby’s name is Luna, after his deceased twin sister.

Blanca comes to the hospital with the journal and meets with Jemma. The Martins go home where they tearfully greet the family they haven’t seen in 11 years. Max comforts and holds Georgia’s hand as the benches and chairs are removed from the waiting room. Lauren sits in isolation with Alain as he confirms who the American was who came to his village. They learn it was not Ebola, but another virus that was just as deadly but treatable. Everyone claps as Lauren emerges with tears in her eyes. Floyd asks if she wants to go for a drink and offers to talk about it, she nods.

Max stares at the ultrasound of his daughter when Dr. Hana Sharpe walks in. He is sitting in the very room his sister was in when she died. Hana says she went to the farmer’s market and he reveals he made a lot of changes while she was gone; he also knows it was all the death in the hospital that got to her. She admits she got immune to it, which was worse; and she only returned because of his excitement and she wants to be as excited as him to be a doctor again. She urges him to slow down and reveals he has cancer, but by looking at him, she figures out he already knew that and wants to know how she can help.