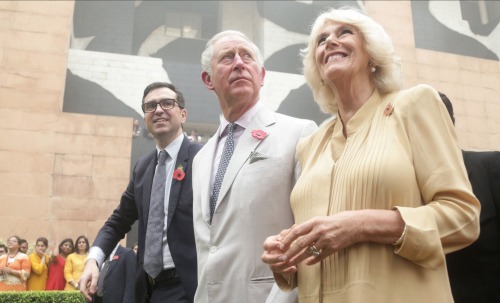 Camilla Parker-Bowles might be the future Queen Consort of England, but it looks like she is still having trouble curtseying from time to time herself. As a matter of fact, her husband Prince Charles couldn’t help but look pretty baffled while Camilla tried to curtsy in front of King Willem-Alexander and Queen Maxima of the Netherlands. The Dutch royals are currently in London for a two-day state visit with Prince Charles and Camilla.

There are new photos that show Camila trying to curtsy in front of Queen Maxima. Unfortunately, Camilla had a hard time keeping steady, forcing Queen Maxima to hold her up right. A rather embarrassed-looking Prince Charles can be seen right next to her. It’s safe to say that it was definitely an awkward moment for all, as royal protocol doesn’t state that Camilla has to curtsey in front of the Dutch royals.

Luckily for Camilla, Maxima was there to hold her before anything else much more embarrassing would have happened. Seeing how the curtsy didn’t work very well in her favor, Camilla ended up greeting King Willem-Alexander with a kiss.

Of course, this isn’t the first time that Camilla has been criticized for her awkward behavior in public. Earlier this year, the Australian media reported on her gaffe during the open ceremony at the Commonwealth Games in Sydney.

Apparently, the Duchess of Cornwall was feeling quite bored and was seen flicking through a pamphlet while sitting next to Prince Charles. She was unaware that she was also being addressed on stage. It didn’t take her very long to realize her mistake, and she put everything down to listen and pay attention to the speech.

Buckingham Palace is yet to make any comments about Camilla Parker-Bowles and her latest blunder, although it’s very doubtful that anything will be said at this point. It’s without a doubt that Camilla has been working very hard to win over her critics, seeing how her husband is now closer than ever before to becoming the next King of England.

And once he does take the throne, all eyes will be on Camilla Parker-Bowles as the Queen Consort. It’s needless to say that everything she does and say in public will definitely be addressed by her critics and fans in one way or another.

In the meantime, don’t forget to check back with CDL for all the latest news and updates on Prince Charles, Camilla Parker Bowles and the rest of the royal family right here.