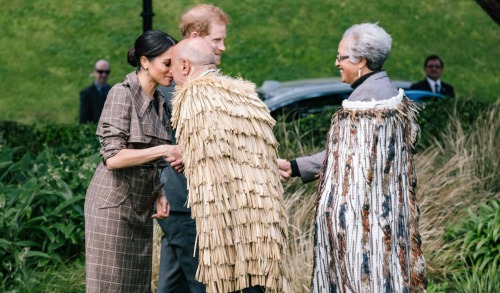 Thomas Markle Senior has reached out to the Archbishop of Canterbury in hopes that he can help heal his rift with his estranged daughter Meghan Markle, much to Queen Elizabeth’s dismay. As a matter of fact, there’s a new report that says Thomas is so desperate to reach out to the Duchess of Sussex that he is willing to have the Archbishop get involved and worse, has reportedly considered legal action to fight for access to his future grandchild.

According to the Daily Mail, Thomas Markle wants to fly to London to meet with the Archbishop of Canterbury in hopes that it will help bring him closer to Meghan, even though she doesn’t want anything to do with him. Meghan apparently stopped taking his phone calls after photos surfaced of him working with a paparazzi photographer during a staged photo-op. If that weren’t enough, he also failed to show up at Prince Harry and Meghan Markle’s royal wedding at Windsor Castle back in May.

Now that Meghan is pregnant with her first child, Thomas believes that he has his rights to see his grandchild, whether the royal family likes it or not. The 74-year-old has told family and friends that Harry and Meghan’s future child will have just as much Markle blood as the “blue blood” of the royals. If that weren’t enough, Thomas also believes that as a grandfather, he has his rights to see the child, regardless of what anyone thinks about it.

Seeing how Queen Elizabeth, Meghan Markle and the rest of the royal family have made no comments about all of the dirty laundry that the Markles have been airing in public, it’s doubtful that they will reach out to Thomas at this point. What’s more, many royal critics also believe that the Archbishop of Canterbury won’t be willing to get involved in the messy feud between the Duchess and her father.

The only person who the Duchess keeps in contact with is her mother, Doria Ragland. When Meghan’s estranged sister Samantha Markle visited London this week, she wasn’t even allowed passed the gates at Kensington Palace. Instead, she was forced to give a hand-written letter to a guardsman in hopes that it would be given to Meghan.

In the meantime, don’t forget to check back with CDL for all the latest news and updates on Meghan Markle’s pregnancy and the rest of the royal family right here.

“Bravo New Zealand for championing the right of women to vote 125 years ago.” — The Duchess of Sussex, as she and The Duke joined PM @JacindaArdern and @GovGeneralNZ Dame Patsy Reddy to celebrate the 125th anniversary of women’s suffrage in New Zealand. #RoyalVisitNZ pic.twitter.com/zpFhyPiE8r