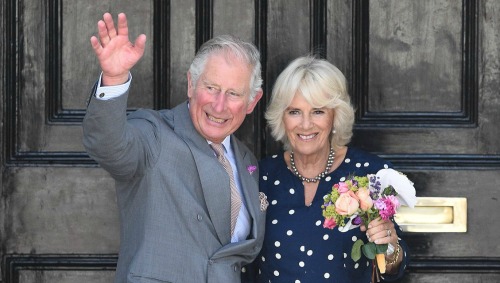 It looks like Camilla Parker-Bowles is already prepping for her future role as the Queen Consort of England. The Duchess of Cornwall stunned the crowd while wearing a lavish tiara during a state banquet at Buckingham Palace last week. As a matter of fact, many royal critics and observers couldn’t help but notice that Camilla looked almost like the Queen herself in the embellished headpiece.

According to reports, Camilla Parker-Bowles looked very much like a future Queen of England during the banquet while standing alongside her husband, Prince Charles and of course, Queen Elizabeth herself. They were also joined by King Willem-Alexander and Queen Maxima of the Netherlands.

Camilla’s tiara was reportedly given to her by Queen Elizabeth as part of a long-term loan after her wedding to Prince Charles back in 2005. The tiara also happened to be the Queen Mother’s favorite headpiece after Her Majesty inherited it in 2002.

For many royal observers, this is the first time they have seen Camilla look like she is ready to be the Queen Consort of England. Apparently, it’s a role that she has been prepping for more now than ever before. Former Buckingham Palace spokesperson, Dickie Arbiter, even went on the record to say that Camilla has so far proven that she is more than the perfect companion for a future king.

Arbiter told Hello! Magazine in a recent interview, “Camilla has supported her husband, Prince Charles, since their marriage in April 2005 and doing a good job of it ever since. She’s a no-nonsense lady and believes that there are things you can change and there are things you can’t and those you can’t don’t waste time trying. As an army wife in her first marriage she became used to dealing with people and their problems. This has helped her enormously in her charitable work and supporting them.”

And while Camilla Parker-Bowels has not made many comments about her future role or what she plans on doing for that matter, she is well aware that she has just as many fans as she does critics. Despite what people say, Camilla knows that being the Queen Consort will be the most important role of her life so far. That’s why she’s doing whatever she can to prepare before her husband Prince Charles officially takes the throne.

In the meantime, don’t forget check back with CDL for all the latest news on the royals right here.