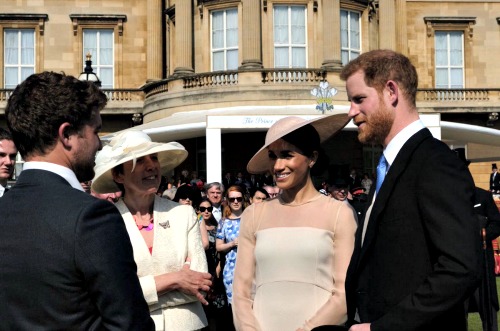 New reports indicate that Prince Harry and Meghan Markle’s future daughters won’t automatically receive royal titles. According to reports, the Duke and Duchess of Sussex’s daughters won’t be getting any royal titles because female members of the monarchy can’t inherit peerages. This means that the three titles awarded to Harry and Meghan can only be passed down to their sons.

Even though Queen Elizabeth passed the Succession to the Crown Act back in 2013, the new gender-neutral rules of succession do not apply to all of the peerage system, meaning priority will still be given to male heirs regardless of birth order. In other words, the dukedom can only be inherited by a son, and not a daughter.

Royal commentator Richard Fitzwilliams recently told The Independent, “Under the current system, any child of the Duke and Duchess won’t automatically have a royal title. The peerage, unlike the succession to the crown, favors males and if they have only daughters, the title of Sussex could die out as it did before.”

He also noted that Harry and Meghan, who may prove to be unconventional royal parents, might prefer that their future children do not have royal titles. After all, Edward and Sophie, the Earl and Countess of Wessex, didn’t want royal titles for their children, either.

Fitzwilliams added, “She and Harry are senior members of the royal family. Will they want HRH or prefer Lord and Lady, which is what they would otherwise be, for their children? We will have to see.”

As far as what kind of baby plans Prince Harry and Meghan Markle have remains to be seen. Both the Duke and Duchess of Sussex have made it no secret that they are eager to start a family of their own sooner rather than later. Prince Harry has said several times in the past that he can’t wait to become a father as he enjoys spending time with children.

Many royal critics know that it’s a matter of “when” rather than “if.” As a matter of fact, many British media outlets are already on Meghan Markle baby bump watch, as they believe that the former Hollywood actress might announce her pregnancy by the end of the year. In the meantime, don’t forget to check back with CDL for all the latest news and updates on Prince Harry, Meghan Markle and the rest of the British royal family right here.