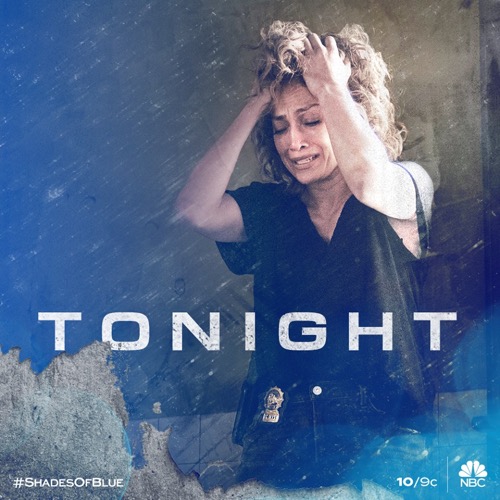 Shades of Blue airs on NBC tonight with an all new Sunday, July 1, season 3 episode 3 called, “That Way Madness Lies,” and we have your weekly Shades Of Blue recap below. On tonight’s Shades of Blue season 2 episode 13 as per the ABC synopsis, “Harlee questions her own sanity as Wozniak keeps secrets from those closest to him. Loman intimidates a witness..”

Harlee was unraveling. She had been trying to piece together back her life and Harlee had even considered moving away with both her daughter and her boyfriend however that all changed when someone killed ADA James Nava. Harlee knew who was behind the hit and she would have wanted the chance to take them down if Woz hadn’t prevented it. Her boss had covered up what the dirty cops over at Intelligence did to James as well as to one of their own. Those people were dangerous and the one person that didn’t believe they needed to be stopped was Woz. Woz was done with getting into fights they couldn’t afford to take on and he also understood that Harlee needed time. She was still grieving after all and so Woz tried to be supportive.

Woz also tried to remain in the background, but that plan went to hell when he showed up late at the funeral with Nate. Nate had been asking his father about Cesar Melina and the two had had a disagreement because Nate suspected Cesar had nothing to do with what happened to James and that he hadn’t killed himself. Nate said that he spoke to Cesar’s father Tomas and Tomas claimed his son couldn’t have killed himself because he was turning his life around, so Nate did some digging and he realized the timeline wasn’t adding up. How could Cesar be a ruthless killer one moment and then feel such profound guilt that he kills himself the next? It didn’t make any sense to Nate and so Nate turned to his father because he knew there was more to the official story.

Nate basically told his father that he suspected the cops were covering up what really happened and he gave his father the chance to be honest with him yet Woz couldn’t do that. He knew he couldn’t let his own son get involved with whatever was happening with Intelligence and so he said that Tomas Melina was probably lying because he wanted to protect his son. Woz said that’s what any good father would try to do even if the son was dead. The two had gotten so deep into this discussion that they missed the beginning of the funeral and made quite a fuss what with interrupting Harlee’s eulogy. She in turn was so upset that she quickly hurried things up just so she wouldn’t have to keep talking and so that was another mark against Woz.

Only Woz later got a call that he sorta had to take. He had long forgave little Adrian and therefore Adrian came to rely on him if he was ever in trouble. It seems Adrian hadn’t heard from his mother in a while and he thinks something might have happened to her, but while he was there, Woz noticed the bruise on Adrian’s face. Someone had roughed him up and so Adrian admitted that people were bothering him. He said they didn’t use to bother him back when they knew Quince was protecting him and that now that things changed his protection was gone. So Woz promised the little boy that he would look for his mother and he also threatened a skinhead teenager into becoming Adrian’s new bodyguard.

The skinhead was told that the next time his head gets a shave it will be Woz holding the knife and so that’ll keep Adrian safe for now. Meanwhile Woz did as he promised and he went to go see Adrian’s mother. Karen still had a lot of safety protocols for someone that was allegedly out of the game and so Woz demanded to know what was going on because he didn’t want Karen inviting more trouble for herself. She said she had the added security (including the gun) because Quince’s guy Eddie Dixon came around. He wanted Karen to make another drug run for him and she refused though her friend Shawna had wanted to do it and so Karen vouched for her. Shawna was only supposed to be away for a night while Karen watched her baby and instead Karen hadn’t seen Shawna in days.

Karen thought something must have gone wrong with run and she knew she would be on the line for it because she vouched for her friend, so Woz told her not to worry because he wouldn’t let anything happen to her and so he had his crew out looking for Shawna. They checked for the young woman at the morgue and all the known places were Eddie Dixon hangs out and they got nothing. They couldn’t find her anywhere and so Woz asked Tufo’s brother Wallace for a favor. Wallace had been inside the same time as this Dixon guy and Woz had asked them if their paths ever crossed. It turns out Wallace was recruited back in jail by Dixon and that meant he could reach out to him again to see if he could get any leads on Shawna.

Wallace was just supposed to talk to Dixon and unfortunately he later told Woz that he had needed to do more. He got high with his old friend because that was the only way to convince Dixon he was still the same guy and so he found out Shawna could possibly be. He later told Woz that Dixon had spoke to him about a beauty parlor that he had to shut down because of an emergency and he said Dixon looked truly upset when he spoke about this “emergency”. Woz and Espada acted on that information by pushing their way into the beauty parlor and there they found a doctor go through Shawna’s intestines. She had swallowed various bags of heroin and one of the bags burst. Shawna was overdosing and the drugs dealers wanted their drugs out of her as quickly as possible.

The guys called for an ambulance and had everyone still in the building arrested however Espada had needed to drive Wallace home and no one wanted to tell Tufo that his brother got high. They didn’t want him to get upset only to later see he was still upset because he found out his brother had rescheduled his meeting with his Parole Officer. Tufo had gone out for drinks with Espada and Loman and they were all drinking when someone from Intelligence sent over a bottle to Loman. Loman had gone to see Tomas Melina and he bullied the grieving father to stop talking about Cesar. Loman did this because Nate had also tried asking him questions and so he reported it to Woz. Woz told him to just close the door on that whole thing and Loam did that just in his own way.

When he found out Intelligence thought he was one of them that had disgusted him. Loman asked them to stop following him and he wanted to sweep what happened under the rug except Woz had questions. Woz said his son was a funeral surround by cops he knew his whole life and, for some reason, he chose to ask Loman. Loman must have done something that made Nate believe he could get information and Woz demanded to know what it was. So Loman admitted that he told Nate all about what their crew were really up to and that Nate knew what sort of man his father truly was underneath it all. Loman said that he told Nate all of this because he needed a way to vent. He said what they did was crazy and that sometimes he needed to find a way to cope or he drown.

Woz hadn’t cared what dragged a rookie into when he started all of his side dealings and so Woz later did something stupid. He went to a bar, picked up a guy, and then started to beat the guy up in an alleyway. The guy left and then returned with friends, so Woz was getting beat around the same time that Harlee realized she made a mistake. Harlee it seems has been keeping in contact with Gina Rodriguez because she thought Gina could help her catch Stahl and she later took Gina in when Gina said Stahl broke into her apartment. She thought Gina was another victim of Stahl’s and had tried to protect her but she came home to find Gina in her clothes wearing the Harlee wig and knew she couldn’t keep trusting this woman. Gina even said afterwards that she hadn’t been entirely sure the man she saw was Stahl and so Harlee asked her to leave.

Harlee kept seeing Stahl everywhere and every time she pursued it she found out she had been wrong and that Stahl hadn’t really been there.

So Harlee told herself she was going to stop pursuing a figment of her imagination and she walked away the last time not knowing that she really had seen Stahl.

Stahl was back in town and he was still keeping tabs on Harlee.