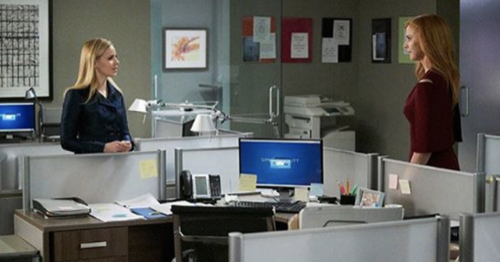 Tonight on the USA Network their critically acclaimed drama, Suits returns with an all-new Wednesday,  July 18, 2018, episode and we have your Suits recap below. On tonight’s Suits season, 8 episode 1 premiere, “Right-Hand Man,” as per the USA Network synopsis, “The Season 8 premiere: Harvey and Zane grapple over who should lead as the firm works through its transition.”

Harvey and Robert are sitting at a table at the wedding. They are talking about where to put Robert’s name on the wall. All they know is that Litt is last.

Alex is running, He meets up with Harvey outside. They talk about how Louis bit his head off. Harvey tells him they are merging with Zane. They had to do this to save the firm. Harvey promises his name will go up next.

Louis calls Katrina in. She overhears he is giving up his cat for her. He wants her to come up with their 10 weakest lawyers.

Robert stares at Rachel’s name on the door. Donna comes up. She is going to miss her too. Donna gives him a photo of Mike and Rachel, Rachel left behind as a gift for him.

Donna sees Harvey coming out. She admits she bugged the conference room and she wants to know why Harvey out himself in that situation. He is going to lose managing partner. Harvey has an idea. He goes to see Alex. He wants him to find out who Robert’s right-hand man is and kick his ass. That way Harvey is managing partner and Alex will get his name on the door.

Robert goes to see his man, her name is Samantha. Meanwhile, Katrina tells Louis she wants to be the one to tell the bottom 10 lawyers that they are done. She promises clean deaths.

Samantha meets with a man named Jeremy Stiller. He doesn’t want to speak with her. Alex told him she was coming. She tells him she came from nothing and has worked her way to the top just like him. He agrees to hear her out.

Katrina comes to see Donna. She gives her a list of 10. Donna knows Louis won’t like the first name on the list. Katrina doesn’t want to. The list is met to be impartial. Louis comes in. Bryan is number one and Louis is not letting him go.

Alex tells Harvey he has it in the bag when they head to Harvey’s office and come face to face with Samantha.

Samantha tells them that their client has dropped out and Robert will be the manager. Harvey is angry. Alex isn’t done yet. Harvey goes to see Robert. He laughs after hearing Harvey has met his right-hand man. They both agree to let Samantha and Alex go toe to toe

Katerina and Bryan go out for lunch. He hasn’t said one thing that makes her want to keep him. Bryan goes to see Louis. Bryan cannot believe he had the gall to let someone else fire him. Louis tells him he told her not to fire him. Louis goes to see Katrina. He is angry. She tells him Bryan always came out too low. Louis demands that Bryan stay and he doesn’t care.

Donna brings Harvey a contract for a sale involving Alex’s sale. Harvey can’t sit back. He needs to do something. Donna asks him if he thinks he is overreacting because Mike just left.

Donna comes to see Katerina. Katerina is angry that Louis is trying to keep Bryan when others work harder and longer. Donna thinks she is talking about herself. Donna makes a point about how Bryan is good for the team even if his numbers are low. She also knows hoe Katerina feels about her being COO. Katerina apologizes. Donna tells her to do a better job.

Alex finds Harvey after meeting with the judge. Alex is mad that Harvey isn’t staying out of it like he said he would.

Katerina brings coffee to Bryan. He isn’t accepting. She apologizes. She is saying all of this because she means it. She could use his help in firing the weaker lawyers. He refuses.

Samantha finds Harvey. She cannot believe he went to the judge. She is going to undo all of this. He demands she doesn’t. She tells him to kiss her ass.

Harvey goes to Robert who tells him he broke his word. He is the better managing partner.

Donna comes to see Bryan. He thanks her for sticking up for her. Donna wants him to help Katerina. He thinks about it.

Harvey is mad at Donna for letting him get into Alex’s case. She told him not to and he did it anyways. She was supposed to stop him. She gives him a pep talk.

Harvey meets with Robert. He calls him his fearless leader. But he wants his office back.

Katerina tells Donna she was right. It was hard firing those people. They plan to get a drink together. Robert comes in. He wants to talk to Donna. He knows she was behind Harvey admitting he was wrong.

Samantha comes to see Harvey. She thinks they got off on the right foot now that things are over. He welcomes her to the firm.

Louis finds Alex going through files to find dirt on Samantha. Louis suggest he make friends not enemies. Meanwhile, Samantha tells Robert she wants name partner before the year is out.