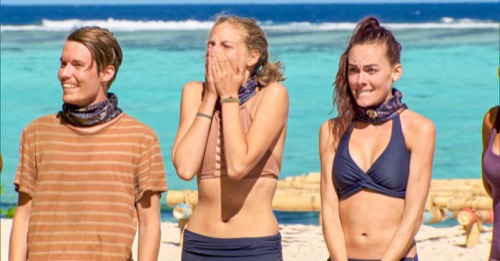 Tonight on CBS Survivor: Ghost Island airs with an all-new Wednesday, May 9, 2018, Season 36 Episode 12 and we have your Survivor recap below. On tonight’s Survivor season, 36 episode 12 called “A Giant Game of Bumper Cars,” as per the CBS synopsis, “A visit from loved ones hits the spot for castaways at the reward challenge, and castaways must bond together to break up a power couple.”

Laurel is happy she survived Tribal Council but is worried that her name was written down. Time for the Reward Challenge where survivors are going to race to retrieve a sandbag, then move through a serious of obstacles to the finish where they will have to land that sandbag on a very small table.

The first person to achieve the challenge will be taken to a beautiful spot where they will enjoy a feast. The only thing that would make this challenge a little bit sweeter would be if they got to share it with a loved one.

Sebastian gets to pick one last person, he picks Donathan and his loved one. Sebastian now has to send someone to Ghost Island, there is an advantage there, Sebastian can go himself or send someone else. Sebastian offers Ghost Island to Wendell, Domenick, and Donathan; Wendell takes it and gives up the reward with his dad in exchange for the advantage.

Wendell is at Ghost Island and it was his dad that told him to do it. Wendell has his secret advantage, it is the same second chance advantage in the same challenge that Malcolm received in Survivor’s 25th season, Survivor Philippines. The tainted advantage has been living on Ghost Island for six years, the only question is can he reverse the curse.

At the reward challenge, even the loved ones are there, they are still taking the game. Meanwhile, back at camp, the women are rallying together against the men. Kellyn starts the game talk and tells the women they need to pull in Donathan and go after the men.

Time for the Immunity Challenge. For today’s challenge, they are going to balance a ball using to handles and a wooden cylinder. At regular intervals, they will add more sections to the cylinder making it more difficult. If at any point they drop the ball, they are out. Wendell reads his advantage if at any point he drops his ball, he is not out, he gets a second chance. Kellyn is the first one out. Wendell drops the ball, he is now on his second try. Domenick wins immunity, he can’t be voted out at tribal council.

Time for Tribal Council. Kellyn says that after the last tribal there were hurt feelings which brought a little weight to camp. Donathan says he is on the bottom but there is a shakeup about to happen. Laurel agrees there is a crack and she hopes they can take advantage of that. Donathan says the girls came to him and the guys came to him to make a deal. Domenick says that there is a convoluted mess and he is happy that he has the necklace around his neck. Wendell looks worried; time to vote. Nobody plays an immunity idol. Three votes Wendell, five votes Chelsea. Chelsea is voted out.