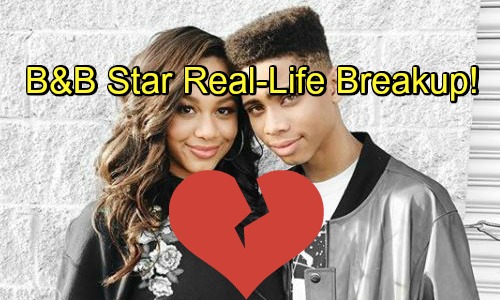 The Bold and the Beautiful spoilers reveal that for one B&B star, we have some sad real-life news to report. Nia Sioux, who portrays Emma Barber on the popular CBS soap, has called it quits with her significant other, Bryce Xavier.

The split appears to be amicable, with the pair simply deciding to go their separate ways as their careers have taken them in different directions. If you’re unfamiliar with Bryce Xavier, he is an actor, musician, and social media sensation. The Bold and the Beautiful’s new star Nia has also had a significant social media presence since her days on the Lifetime Television reality drama Dance Moms.

Nia and Bryce had been together for about a year when they ended their relationship. The exact timing of their breakup is unclear, but Nia recently took to her Instagram stories to tell her fans about the split.

Nia wrote, “A lot of people have noticed that Bryce and I don’t post much with each other lately, so I wanted to take this time to tell everyone that we are not together anymore. Truly blessed for the time we’ve shared and I hope nothing but the best for him.”

A bit later, Bryce addressed the news on his own Instagram stories, and shed some light on the reason for the split. Bryce wrote, “Me and Nia broke up a while back…we have both been super busy and have a lot of stuff coming up and just didn’t have the time to tend to each other like we used to! Love her with all my heart, but sometimes you need to let the ones u love most go so you can both fly.”

It sounds like these two will remain on good terms as their lives take them on separate journeys. You can, of course, continue to catch Nia on The Bold and the Beautiful. Stay tuned to the CBS soap and don’t forget to check CDL often for the latest Bold and the Beautiful spoilers, updates, and news.