BY Sean O'Brien on May 18, 2018 | Comments: Leave Comments
Related : Soap Opera, Spoiler, Television, The Bold and the Beautiful 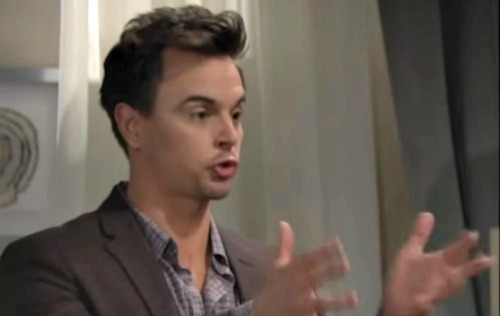 The Bold and the Beautiful spoilers tease that Wyatt (Darin Brooks) has the power to marry Katie (Heather Tom) if he wants to. When Bill (Don Diamont) offered his number one son (a useful, exaggeration to be sure) the keys to the Spencer kingdom and urged him to remain silent about the Dollar Still ruse, he also ceded power without apparently knowing it.

Brooks resembles mega-movie star Johnny Depp to a certain degree. His general facial resemblance, eclectic on-screen persona, and that hair are enough for this scribe’s take to be offered as a fair comparison. There may be those who disagree. So be it and now let’s dig into this plot.

Wyatt happened upon two scenes last week. He saw his dad and Steffy (Jacqueline MacInnes Wood) embracing in the hallway at Spencer Publications. That real view was misinterpreted. But the fake scene Wyatt saw next proved epic.

Bill coerced Justin (Aaron Spears) to invent a false look. Spears’ character obliged by making it appear as though the room Steffy just left had been used for cavorting. The lawyer strew lit candles about, ruffled a blanket on the couch, and even streaked lipstick on a pillow. It worked, as Wyatt entered, couldn’t believe what he saw and rushed to tell Liam (Scott Clifton) at the log cabin hideout on Brooke’s (Katherine Kelly Lang) property.

Readers, have you noticed that many fictional and real life villains keep lawyers close by and call them friends? Such is the case with Dollar Bill. But then his friend felt used, which proved problematic.

Justin was disgusted by the results of his actions. He let Bill have it on a few occasions until Wyatt was again written into the script and overheard the truth. It was at that moment that B&B’s Daytime Depp gained leverage over his father.

Previously threatened by Bill, Wyatt now has the ability to negotiate with his father. Bill can be told that the Dollar Still ruse will be kept quiet, but that he’s going to have a relationship with Katie. Plus, Bill won’t try to take full custody of Will (Zane Alexander Achor) either.

Bill is in a weak position. If Wyatt dishes, he’ll likely lose Steffy break his already fractured relationship with Liam as well. That’s the reason why Bill let Wyatt have his prized, classic Ferrari during an outdoor scene.

Wyatt knows the above paragraph falls strongly in his favor. If he’s ruthless, like Bill claims his son to be, then a deal will be enforced. But this leverage is time-limited, as Wyatt will need to tell all parties what he’s learned very soon in order to retain credibility. Of course B&B spoilers tell us that once Katie (Heather Tom) gets a hold of Wyatt’s ear she’ll convince the waffler to make a deal with the devil. Yes, this is a good soapy setup that will be interesting to watch play out.