The Bold and the Beautiful Spoilers: Steffy Names Baby – Moves On Without Liam

BY hellodrdavis on May 17, 2018 | Comments: 2 comments
Related : Soap Opera, Spoiler, Television, The Bold and the Beautiful 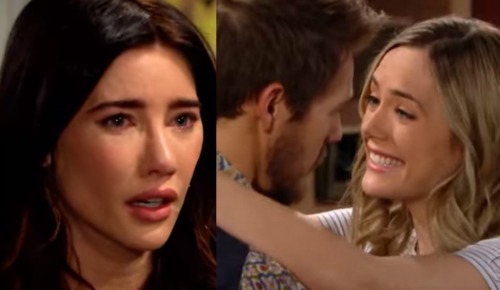 The Bold and the Beautiful spoilers tease that Steffy (Jaqueline MacInnes Wood) may soon take steps to move on without Liam (Scott Clifton). Steffy has been devastated by Liam’s decision to marry Hope (Annika Noelle), and her pleas for Liam to reconsider for the sake of their unborn daughter have fallen on deaf ears.

Ridge’s (Thorsten Kaye) attempts to get Liam to see he made a mistake by dumping Steffy have failed as well. In fact, Ridge may as well voice his concerns to a brick wall. Liam truly believes that pregnant Steffy doesn’t know what she wants and is somehow torn between himself and Bill (Don Diamont). This frustrates Steffy to no end.

Let’s face it, Steffy doesn’t need to be dealing with Liam’s nonsense right now. Her due date is approaching quickly, and there’s a lot that needs to be done in preparation for the baby. The Bold and the Beautiful spoilers say that Steffy will soon take a big step forward by giving her unborn daughter a name. Will she get any input from Liam, or will she name the baby without him? If it’s the latter, it may be a clear signal that she is at least somewhat accepting life without Liam.

If that’s the case, will Steffy soften at all to Bill’s advances? Bill has been ever-present at Steffy’s house, reminding her that he’s there for her and will give her the life of her dreams if she’ll have him. Thus far, she’s been clear that she doesn’t want Bill, but perhaps she’ll soften a bit and decide that it would actually be nice to have someone looking out for her.

Will Steffy get fed up with fighting for Lame Liam and move on down the road? And will that road involve Bill? Stay tuned to the CBS soap and don’t forget to check CDL often for the latest Bold and the Beautiful spoilers, updates, and news.