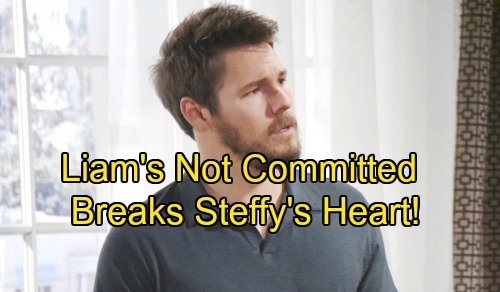 The Bold and the Beautiful (B&B) spoilers tease that Bill’s (Don Diamont) behavior has many fans seething. Even some staunch “Still” supporters are abandoning ship. It’s one thing to be conniving and ruthless. It’s quite another to actively stalk your son’s fiancée and the mother of your grandchild.

Steffy (Jacqueline MacInnes Wood) couldn’t be any clearer about her feelings. She’s repeatedly told Bill that she only wants Liam (Scott Clifton). Steffy just needs Bill to back off and leave her alone, but he won’t do it. Instead, he’s using Taylor’s (Hunter Tylo) breakdown against her. This blackmail plot is really crossing the line.

The Bold and the Beautiful spoilers say Bill will eventually switch to a different strategy, but he’s obviously not giving up. As bad as Bill is, perhaps he’s right about one thing. He feels certain that Liam isn’t fully devoted to Steffy. Bill thinks she needs a man who’s completely committed and that may be the case.

Of course, that’s all Bill’s correct about. He believes he’s the perfect guy for Steffy and we’re not willing to go that far. At this point, no woman deserves to endure the Bill Spencer horror show.

However, Bill’s statement about Liam could be true. After Steffy suggested postponing the wedding, what did Liam do? He immediately went running to Hope and spilled their business. It’s almost like he’s dangling this opportunity right in front of her. Liam must still want Hope on some level.

B&B fans know Liam has a hard time sticking with one lovely lady. There are just too many that catch his eye on The Bold and the Beautiful. Hope’s the other woman in his heart at the moment. Their friendship’s still in play and they’ve resumed working together as well. That could easily cross over into romantic territory again. The risks are high since they nearly married not too long ago.

That’s another big part of this mess. Liam has admitted that he craves the stability of wedded bliss. Can he really handle not being married to Steffy? If the “Steam” nuptials are delayed too long, Liam may not be able to resist Hope’s temptation.