The Bold and the Beautiful Spoilers: Bill’s The Winner, Steffy Wears His Necklace – Liam’s Life Wrecked

BY Sean O'Brien on July 27, 2018 | Comments: one comment
Related : Soap Opera, Spoiler, Television, The Bold and the Beautiful 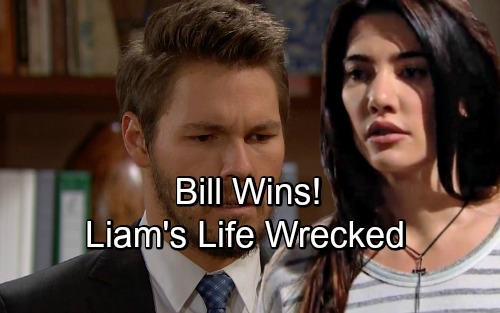 The Bold and the Beautiful spoilers tease that Bill (Don Diamont) and Steffy (Jacqueline MacInnes Wood) are really happening. Oh, they aren’t married yet. But as soon as those negotiated nuptials take place, thereby making Steffy a far more powerful force at Forrester Creations via her obtained stock, B&B’s world will be totally upended. Meanwhile, Liam’s (Scott Clifton) life will be wrecked.

Actually, it’s fair to claim that Liam drove his own life into chaos and potentially, ruin. But let’s not start with his recent make-out session with Hope (Annika Noelle) after the fashion show. No, no, no, that would be negligent. Instead, let’s consider another woman that Liam kissed who wasn’t Steffy.

Sally (Courtney Hope) was Liam’s obsession last year at this time. He made various claims to Steffy about his intentions back then as well. But eventually, like his father, circumstances carried Liam away and he ended up kissing Sally, twice, under the Spectra Fashions building wreckage.

There’s no need to fully rehash that storyline. Suffice it to say, for newer fans, Liam cheated on Steffy, then he told her what happened. She ran off, Bill trailed her to the Forrester guest house through the magic of soap and they slept together.

As Liam noted at the cliff house, Steffy’s actions were far more egregious than what he she caught him doing with Hope this week. However, both of their actions further verified the dysfunctional, so-called relationship Kelly’s parents continued to have. Yes, the Steam has been escaping from this pairing for awhile.

Bill has long projected that he would end up with Steffy and that his demeaned son would be with Dope, uh, Hope. Diamont’s comparison line was just as hilarious as when Bill asked Justin (Aaron Spears) if he was going off to shave his head and Spears character said yes.

Diamont’s turns within this extended arc have been tremendous. He mixes moments of true seriousness with one-liners as well as anyone in the business. Dollar Bill is a detestable, but engaging villain. Great writing and acting combine to pull that off.

Wood and Clifton have also wrung countless moments of on-again, off-again angst out of their characters. This scribe would vote for Diamont, Wood, and Clifton in Emmy categories if he could. That’s a wink to the Daytime Emmy Committee, if anyone, or more than one, is listening. This scribe would also accept a walk-on as one of Spencer Publications errand guys, for scale of course.