The Bold and the Beautiful Spoilers: Brooke Explodes Over Ridge’s Scheme – Rips Into Judge McMullen for Ruling Against Bill

BY Heather Hughes on September 26, 2018 | Comments: one comment
Related : Soap Opera, Spoiler, Television, The Bold and the Beautiful 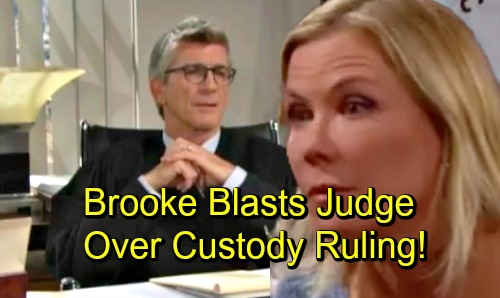 The Bold and the Beautiful (B&B) spoilers tease that Judge McMullen (Joe Lando) will remain torn about his next move. Ridge (Thorsten Kaye) is hoping his pal will come through for him soon. He desperately wants the judge to rule in Katie’s (Heather Tom) favor.

However, Judge McMullen could be risking his career if he goes along with that plan. He’ll be tempted to grant Ridge’s request, but another part of him will want to just do his job. Judge McMullen will at least hear both sides of the custody case before he makes his final decision. This isn’t a choice he can make lightly.

Of course, that means it could be tough to tell Judge McMullen’s true feelings. Let’s consider what’ll happen after he delivers his ruling. Next week, The Bold and the Beautiful spoilers say Bill (Don Diamont) and Katie will share big news with Will (Finnegan George). They’ll sit the boy down for a serious discussion, so that suggests that Bill will lose.

It sounds like Katie and Bill will have to explain the complicated situation. They’ll need to tell Will that he won’t be spending as much time at his dad’s place. Bill will undoubtedly assure Will of his love and promise he still wants to be in his life. Katie claims she doesn’t want to keep Bill away entirely, so let’s hope Will can still bond with his father.

Meanwhile, The Bold and the Beautiful spoilers say Brooke will hit the roof. She’ll end up confronting Judge McMullen, so it seems she’ll learn all about the favor. Brooke may accuse the judge of ruling against Bill because of it. Judge McMullen may argue that he really thought this was the right call, but Brooke may not be convinced.

Will Brooke threaten to blow the whistle on the judge? Whether she does it or not, the possibility could cause major issues in her marriage. Ridge and Brooke will face more problems than ever. Plus, Brooke will want to support Bill in the terrible aftermath. It looks like B&B’s creating the perfect storm for a “Brill” reunion!