The Bold and the Beautiful Spoilers: Brooke Nurses Injured Bill Back to Health, Explodes at Guilty Ridge – ‘Brill’ Reunion On

BY Heather Hughes on October 11, 2018 | Comments: one comment
Related : Soap Opera, Spoiler, Television, The Bold and the Beautiful 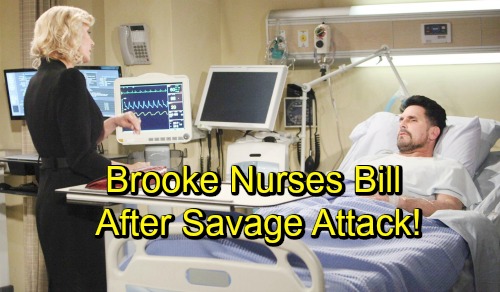 The Bold and the Beautiful (B&B) spoilers tease that Brooke (Katherine Kelly Lang) will get some infuriating news. She was livid when she realized Ridge (Thorsten Kaye) pressured Judge McMullen (Joe Lando), but a worse blow is still to come. Before we get to that, let’s consider the state of Brooke and Ridge’s marriage. Obviously, these two aren’t in a great place right now.

First, Ridge and Brooke fought over which woman Liam (Scott Clifton) should be with. They understandably rooted for their own daughters, but that led to some hostility. The drama continued when Ridge announced some budget cuts. He ended up downsizing Hope’s (Annika Noelle) line while Steffy’s (Jacqueline MacInnes Wood) dreams moved full-speed ahead.

That brought another round of “Bridge” fighting. Now they’re facing issues over Ridge’s influence on the judge. It won’t be long until a kiss between Brooke and Bill (Don Diamont) wreaks havoc. Ridge and Brooke’s marriage will be hanging by a thread, but Brooke won’t give up. The Bold and the Beautiful spoilers say she’ll fight for her relationship and urge Ridge to do the same.

Brooke’s plan may work initially, but what happens when she hears about Bill’s upcoming accident? A leaked B&B script reveals that Bill will be hospitalized after sparring with Ridge and Thorne (Ingo Rademacher). There’s a good chance Ridge will be the main source of trouble. He’ll likely shove Bill or find some other way to cause his enemy’s injuries.

That could be enough to make Brooke dump Ridge. She’s been drawn to Bill lately anyway, so this could really seal the deal. It’s easy to imagine Brooke wanting to nurse Bill back to health. As for Ridge, Brooke may think he’s a monster after this. It’s wrong for her to be locking lips with her ex, but she’s not going around messing with a kid’s custody situation or putting people in the hospital.

Bill’s latest ordeal could be a real turning point. It could mark the shift from “Bridge” to “Brill,” so maybe Bill and Brooke fans should gear up for their reunion! We’ll give you updates as other Bold and the Beautiful details emerge. Stay tuned to B&B and don’t forget to check CDL often for the latest Bold and the Beautiful spoilers, updates, and news.