BY Sean O'Brien on August 23, 2018 | Comments: one comment
Related : Soap Opera, Spoiler, Television, The Bold and the Beautiful 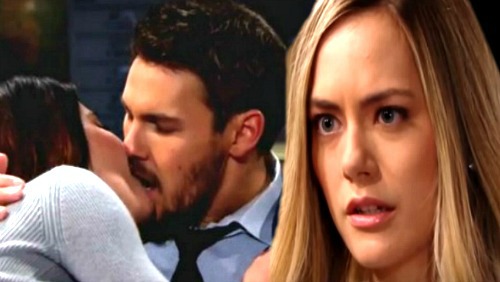 The Bold and the Beautiful spoilers tease that Brooke’s (Katherine Kelly Lang) threat to Taylor (Hunter Tylo) has already lead to a classic cake fight at what should have been Lope’s wedding party. But poking that bear now also means Steffy (Jacqueline MacInnes Wood) will be protective of her mother, while also being far less conciliatory.

Steffy and Hope (Annika Noelle) recently had a heart-to-heart. They shared their honest feelings about their mother’s having battled over Ridge (as then played by Ron Moss and now by Thorsten Kaye). Both Liam (Scott Clifton) groupies are the mothers of his children. So, they decided to buck their childhood experiences and team up, rather than advance their rivalry.

Hope was truly appreciative of Steffy’s grand gesture. Choosing to admit defeat, tell Liam that Steam was over, take off her engagement ring, put it on Hope’s finger, and tell Lope to get married were selfless acts. Liam was equally impressed by his other love’s kind acts.

Steffy later accepted Hope’s sincere offer to attend Lope’s marriage retry, but she asked if Taylor could attend. Hope agreed that it was fine for Steffy to have a supportive person by her side.

Bill still holds the power to report Taylor to the authorities, though viewers are right to wonder if his long after the fact words would have credibility with the Los Angeles authorities. So, it’s possible that Steffy’s mother could face prosecution, or at least be thrown off-course.

Steffy now seems prone to being protective of her family, which may include fighting off Brooke. If Hope doesn’t walk what remains a tight line between the families she wants to blend, Steffy could easily renew their war.

Brooke provoked this problem by confronting Taylor. She should have held her tongue, said nothing to Tylo’s alter ego. Taylor would likely have said a few choice words and glared during the ceremony, as she actually did. Thus, the act of grabbing cake and flinging it at Brooke likely wouldn’t have happened.

Fresh wounds have been reopened. Yes, the possibility of Steffy seeking to undermine Lope now exists, where it didn’t before. CDL is a leading source for everything linked to The Bold and the Beautiful. Check back regularly for B&B spoilers and news!