The Bold and the Beautiful Spoilers: Thursday, August 23 – Bill Must Choose Between Work and Will – Ridge and Brooke Disagree

BY hellodrdavis on August 22, 2018 | Comments: one comment
Related : Soap Opera, Spoiler, Television, The Bold and the Beautiful 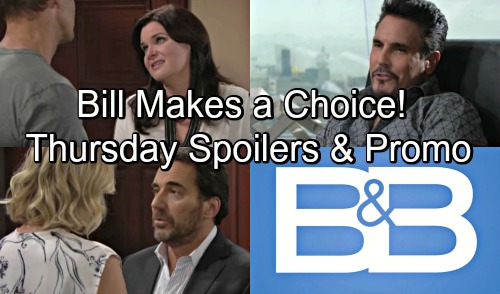 The Bold and the Beautiful spoilers for Thursday, August 23, tease that Bill (Don Diamont) will again chat with Justin (Aaron D. Spears) about the state of affairs between himself and his sons. Bill will comment that winning back the respect of his sons has nothing to do with going “soft,” so it sounds like these two may bicker about exactly how Bill will go about garnering his sons’ respect.

B&B spoilers say that Bill will also become conflicted on Thursday’s episode when Justin pushes him to take a sudden but important business meeting at the same time that he’s supposed to pick up Will (Finnegan George) for a scheduled visitation. Which obligation will Bill choose?

Meanwhile, on Thursday’s new B&B episode, August 23, Thorne (Ingo Rademacher) and Katie (Heather Tom) will discuss the issue of Will and Bill’s role in his life. Things have been tense between Thorne and Bill ever since Bill’s disastrous (and failed) attempt to watch Will overnight. Thorne will make a promise to Katie that he will step up to be a father-figure in Will’s life if Bill isn’t present.

This may be a little too much for Katie, who will respond emotionally that Will does want to see his dad. Katie may not be ready to consider replacing Will’s father, even though there are clear problems with Will and his dad. Thorne may be a great influence on Will, but after all, Will does have a dad in the picture.

Finally, on Thursday, August 23, Brooke (Katherine Kelly Lang) and Ridge (Thorsten Kaye) will have a conversation about the situation with Will and Bill. Ridge won’t hold back and will point out that Will “needs a positive male role model in his life to compensate for his idiot father.” B&B spoilers say that Ridge and Brooke will agree to disagree on this issue, so look for Brooke to have a different opinion on the matter.

It sounds like we’re in for some emotional and family-oriented scenes on Thursday! Be sure to catch all the drama. Stay tuned to the CBS soap and don’t forget to check CDL often for the latest Bold and the Beautiful spoilers, updates, and news.