The Bold and the Beautiful Spoilers: Dying Bill’s Loved Ones Worry and Wait – Brooke, Katie, Wyatt and Liam Hold Vigil After Tragedy 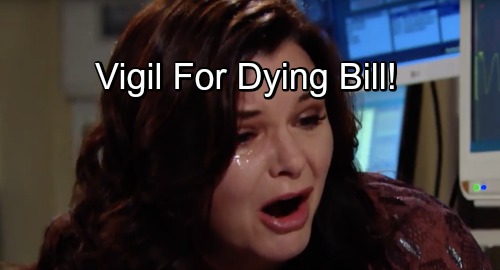 The Bold and the Beautiful (B&B) spoilers tease that Brooke (Katherine Kelly Lang) will fear the worst after Bill’s (Don Diamont) horrifying fall. Ridge (Thorsten Kaye) will shove Bill during a confrontation, which will also involve Thorne (Ingo Rademacher). The brawl will come to a screeching halt when Bill goes flying off the balcony and takes a hard hit below.

Bill’s face will be bloody as Thorne and Ridge gaze down at him. They’ll see that Bill’s unconscious and in dire need of medical attention. Once the paramedics are called, they’ll rush over and take Bill to the hospital ASAP. Katie (Heather Tom) and Brooke will get updates, so it won’t be long until they’ve cornered their husbands in the waiting area. They’ll be outraged that their actions led to this nightmare.

B&B fans know Brooke’s been bonding with Bill again lately. She’ll take the news of his injuries particularly hard, which could spell trouble for her marriage. Ridge wanted to make Bill back off, but he’ll just end up pushing Bill and Brooke even closer. Bill’s going to survive as usual, so Ridge will have serious competition once his rival recovers.

For now, Katie won’t be certain that Bill can pull through. She’s been watching Will (Finnegan George) connect with his dad, so she’ll hate the thought of Bill dying. The Bold and the Beautiful spoilers say Katie will blast Thorne for his part in the destruction. She’ll consider what’ll happen if Thorne has to fill Will in on Bill’s death.

The Bold and the Beautiful spoilers say Katie will sob by Bill’s bedside and beg him to make it. She’ll plead for Will’s sake and perhaps her own, too. Katie’s had her fair share of issues with Bill, but she still cares about him.

Brooke will make some appearances in Bill’s hospital room as well. Of course, Wyatt (Darin Brooks) and Liam (Scott Clifton) will pop in to make some emotional declarations. Bill’s loved ones will want him to have the support he needs to get through this.