The Bold and the Beautiful Spoilers: Evil Bill Blackmails Steffy – Threatens To Expose Taylor as Shooter

BY hellodrdavis on June 14, 2018 | Comments: 3 comments
Related : Soap Opera, Spoiler, Television, The Bold and the Beautiful 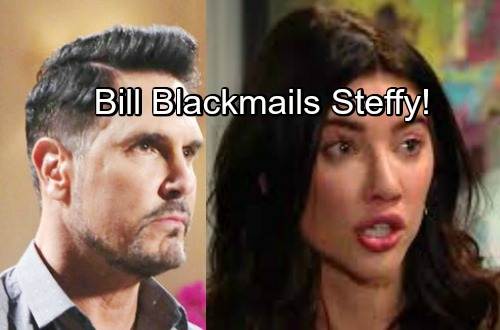 The Bold and the Beautiful spoilers tease that Steffy (Jacqueline MacInnes Wood) and Liam (Scott Clifton) are in for some trying times ahead. Sure, their reunion and new baby have them over-the-top happy right now. But you didn’t think that Bill (Don Diamont) would stay in the background and leave them alone forever, did you?

Bill wants Steffy, and he’s willing to do anything to get what he wants. His scheme to keep Steffy and Liam apart ultimately failed, but Bill’s surely got other tricks up his sleeve. One may involve Taylor (Hunter Tylo). B&B spoilers say that an unspeakable blackmail will soon put a damper on a happy occasion. Bill’s certainly got blackmail material against Steffy and Taylor!

Here’s how it could go down. Bill may not aggressively pursue Steffy going forward, but he’s probably betting that Steam’s relationship will eventually unravel on its own, which could easily happen if Hope (Annika Noelle) ends up pregnant with Liam’s baby. Bill might decide to take a “watch and wait” approach with Steffy, and in the meantime make certain demands that would give him access to the woman he “loves.”

For example, he might threaten to tell the police about Taylor unless he gets to see his granddaughter, which would essentially mean he’d get to see Steffy, too. Or he may demand to be present at Steam’s wedding, just to irritate people and put a damper on Steam’s happy day. It would be just like Bill to use what he knows about Taylor to worm his way into Steffy’s life and upset everyone.

Will Bill blackmail Steffy, and if so, will Steffy give in to his demands to keep Taylor out of jail? Stay tuned to the CBS soap and don’t forget to check CDL often for the latest Bold and the Beautiful spoilers, updates, and news.