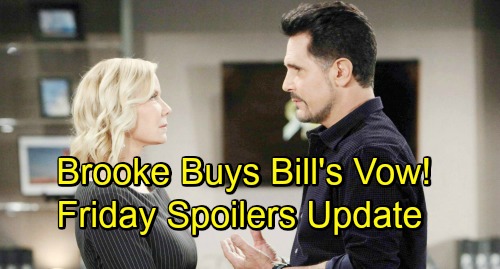 The Bold and the Beautiful (B&B) spoilers for Friday, November 16, tease that Bill (Don Diamont) will share another tender moment with Brooke (Katherine Kelly Lang). He decided to have mercy on Ridge (Thorsten Kaye) and Judge McMullen (Joe Lando), so Brooke’s incredibly grateful. She believes Bill has changed for the better, so he’ll keep working that angle.

Bill will deliver a passionate promise in Friday’s B&B episode. He’ll want Brooke to know his future’s going to be different than the past he regrets. Bill will vow to continue down the path Brooke put him on. He credits Brooke with the changes he’s made, so he won’t want to disappoint her.

Bill may even promise to be there when Ridge inevitably lets Brooke down again. He might suggest that sooner or later, they’re going to end up together. Bill’s convinced that Brooke belongs with him, not Ridge. She isn’t sold on that idea yet, but she could shift her perspective in the weeks ahead. Ridge has done some pretty cruel things lately, so Bill’s not looking too shabby these days!

Of course, Ridge will see right through Bill’s new-and-improved act. He won’t think Bill’s changed at all. In fact, Ridge will believe Bill’s more manipulative than ever. It seems obvious Bill just let Ridge off the hook for Brooke’s sake. Bill never does anything good without an ulterior motive. He can say he’s changed all he wants, but it’s hard to buy it.

If Bill truly thought there was no chance for a reunion, he probably would’ve had Ridge thrown behind bars. Since he’s keeping hope alive, Bill had to put on a show and let Brooke think he was suddenly Saint Bill. However, Ridge will think he sees Bill for who he really is: a scheming rival who’s out to steal his wife.

The Bold and the Beautiful spoilers say Ridge will share his thoughts with Wyatt (Darin Brooks), Liam (Scott Clifton), Thorne (Ingo Rademach) and Katie (Heather Tom). They’ll all debate whether Bill’s heart is warming up or forever stone cold. No matter how the others feel, Ridge will stand by his claims. He’ll feel confident that Bill’s doing this to reunite with Brooke, but he’ll refuse to stand for it.

Bill warned Ridge not to test his patience again, so any other sneaky moves could bring big trouble! The Bold and the Beautiful fans won’t want to miss B&B’s next bombshells. We’ll give you updates as other news comes in. Stay tuned to the CBS soap and don’t forget to check CDL often for the latest Bold and the Beautiful spoilers, updates and news.