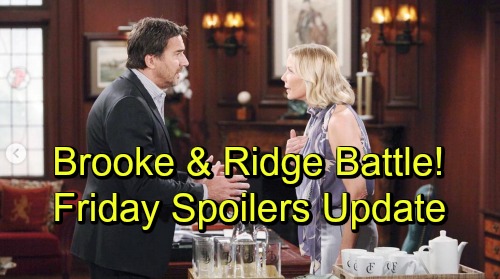 The Bold and the Beautiful (B&B) spoilers for Friday, October 12, tease that Ridge (Thorsten Kaye) will feel like his world’s falling apart. Steffy (Jacqueline MacInnes Wood) just brought him up to speed on the shocking scene she witnessed. She caught Bill (Don Diamont) and Brooke (Katherine Kelly Lang) locking lips, so she thought Ridge should know about it.

Ridge won’t be surprised that Bill went after Brooke again. However, he’ll undoubtedly indicate disappointment in his wife. Ridge thought their marriage was stronger than this, but all the recent hurdles have taken a toll. Steffy will criticize Brooke for her actions and try to help Ridge through this mess. She’ll hate that she had to cause pain, but Ridge will be glad he’s now in the loop.

Once Ridge and Steffy’s conversation concludes, it’ll be time for a heated showdown. The Bold and the Beautiful spoilers say Ridge will seethe as he goes off to find Brooke. He’ll be prepared to unleash his wrath and demand some answers.

Ridge may wonder if Brooke’s been siding with Bill because of her lingering feelings. He’ll likely confront her as the Friday cliffhanger, but Monday will bring a deeper discussion. B&B fans can expect some buried issues to be unearthed. Brooke and Ridge will rage over each other’s betrayals, so don’t miss the tense scenes ahead.

In the meantime, Wyatt (Darin Brooks) will be a bit puzzled. He’ll tell Quinn (Rena Sofer) all about his new job as Forrester Creations’ social media manager, but her reaction won’t be what he expects. The Bold and the Beautiful spoilers say Wyatt will call his mom out on her response. She may act like it’s not a good idea, so Wyatt will certainly want to know why.

Quinn may suggest that mixing business with pleasure isn’t a great plan for Wyatt. She might not have a lot of faith in Wyatt and Sally (Courtney Hope) to make it last. If they broke up, that could lead to some awkwardness around the office. Then again, Quinn may offer some other excuse. No one can ever really guess what’s going on in that head of hers!