BY hellodrdavis on December 9, 2018 | Comments: one comment
Related : Soap Opera, Spoiler, Television, The Bold and the Beautiful 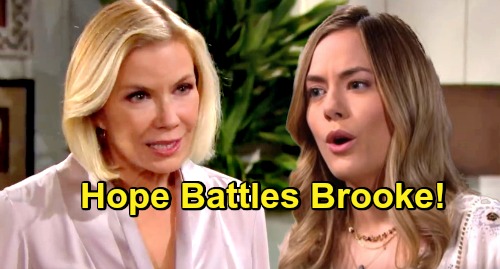 The Bold and the Beautiful spoilers tease that Hope (Annika Noelle) may soon be regretting a big decision she recently made. After a scary run-in with Taylor (Hunter Tylo), Hope decided to spill the secret about Taylor shooting Bill (Don Diamont) to Brooke (Katherine Kelly Lang). Hope was under the impression that her mother would also keep the secret, but that didn’t happen.

And now, it looks like Brooke will want to spread the secret to more people. B&B spoilers say that Hope and Brooke will soon disagree over whether to let some other family members in on Taylor’s secret. It seems that Brooke will want to tell her sisters Katie (Heather Tom) and Donna (Jennifer Gareis) about Taylor shooting Bill.

It’s unclear exactly what Brooke things telling Katie and Donna about the shooting would achieve; she may just want to warn her sisters about the possible threat since Taylor seems anti-Logan these days. At any rate, it appears that Hope will disagree with Brooke’s desire to spread the secret, and the two will argue.

Hope probably feels some responsibility to help contain the secret, since she saw how distressed Steffy was to learn that Brooke knew about the shooting. Hope will probably wonder why Katie and Donna would need to become part of the inner circle regarding the secret, as they really aren’t being blamed by Taylor for anything these days.

So it looks like we’re in for a battle of the wills between Hope and Brooke over whether to spill the secret to the rest of the Logan clan. Do you think Brooke will end up telling Katie and Donna about the shooting? Stay tuned to the CBS soap and don’t forget to check CDL often for the latest Bold and the Beautiful spoilers, updates, and news.