The Bold and the Beautiful Spoilers: Katie’s Jealous Rage as Wyatt Moves On with Sally – Thorne Stirs the Pot

BY Marcy Cohen on June 20, 2018 | Comments: one comment
Related : Soap Opera, Spoiler, Television, The Bold and the Beautiful 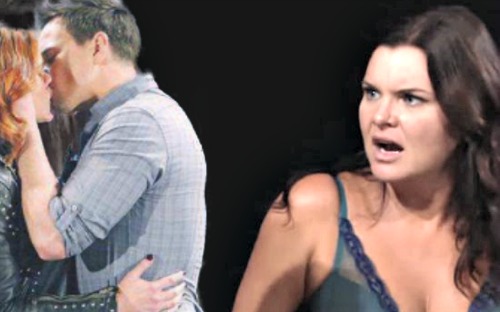 The Bold and the Beautiful (B&B) spoilers tease that Katie’s (Heather Tom) in for a shock. In fact, she should face two unpleasant surprises soon. Both of them will probably involve Sally’s (Courtney Hope) return to Los Angeles. Whenever Sally’s in town, drama’s not far behind!

Thanks to Wyatt’s (Darin Brooks) nudge, Sally will be sticking around and planting some roots again. She may not have her Spectra crew backing her up, but she can still pursue a fashion career. Sally just has to get her foot in the door. It turns out Forrester Creations will be where she lands.

After Eric (John McCook) hears about Sally’s struggles, he’ll want to help somehow. Despite all her mistakes, Sally’s got a flair for fashion and a can-do spirit. Plus, Thomas (Pierson Fode) apparently can’t stop breaking her heart! Eric may want to make up for his grandson’s waffling and a job offer is the perfect way to do that.

A Forrester meeting should bring Thorne (Ingo Rademacher) in the loop. Like Ridge (Thorsten Kaye) and most of the others, Thorne will be wary of hiring Sally. He’s protective of the company and his family’s legacy. There have already been some worries surrounding Emma (Nia Sioux) and her Barber ties. Thorne may think it’s a bad idea to add one more threat though Sally.

The Bold and the Beautiful spoilers say Thorne will eventually deliver startling news to Katie. That could relate to Sally joining the team. You can bet Eric won’t back down, so Thorne might confess that there’s nothing he can do.

However, Katie could actually face a double B&B blow. It seems likely that Wyatt will vouch for Sally with Eric. Wyatt’s formed a special bond with his stepdad, so that should play a role in Eric’s decision as well.

Eric will realize Wyatt and Sally are linked romantically, which means word should spread like wildfire. Once Thorne gets updates, he won’t hesitate to fill Katie in. Thorne will want Katie to see that Wyatt’s moving on. He’ll hope it’ll convince her to go all in on a new relationship.

There’s a good chance jealousy will strike for Katie. She may fear Wyatt will get hurt by the redhead on the rebound! Of course, Wyatt’s also a wounded heart. He just as easily hurt Sally, but Katie may not see it that way.