The Bold and the Beautiful Spoilers: Liam and Steffy Build A Future With Baby Kelly – But Bill Claims He’s The Dad

BY hellodrdavis on May 26, 2018 | Comments: 2 comments
Related : Soap Opera, Spoiler, Television, The Bold and the Beautiful 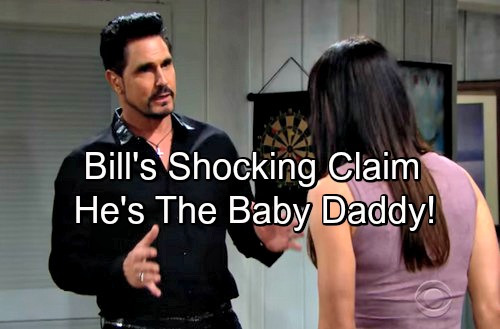 The Bold and the Beautiful spoilers tease that Liam (Scott Clifton) and Steffy (Jacqueline MacInnes Wood) may be on the path toward a reunion soon. These two have been though a lot, with Steffy’s infidelity, Hope’s (Annika Noelle) return to Los Angeles, and Bill’s (Don Diamont) ridiculous lies and deception.

After Wyatt (Darin Brooks) spills the beans and reveals Bill’s plot to keep “Steam” apart, Liam will have a big choice on his hands: stay with Hope or return to Steffy. He’ll also have baby Kelly to meet. And it looks like Steam are headed back together as they bond over their daughter.

The Bold and the Beautiful spoilers say that Steffy’s dreams of motherhood and a family with Liam may finally come true. This is an exciting idea for Steam fans.

But don’t think for a second that it will be easy. Liam’s going to have to deal with Hope and get closure on that relationship (hopefully) before he moves forward with Steffy and baby Kelly. Liam will also have to make sure he’s fully forgiven Steffy and Steffy will have to deal with the fact that Liam left her and immediately proposed to Hope. It’s a lot to work out, but Steam can do it.

What Steam may have more difficulty with is dealing with Bill going forward. The Bold and the Beautiful spoilers say that Bill’s obsession with Steffy isn’t going away, and that he will continue to manipulate despite her pleading for him to stop. When is Bill going to give it up? Surely Steam will be even stronger this time around, so what could Bill possibly do to cause problems in their relationship?

Well, one unpleasant possibility is that Bill will trick Steam into believing that Steffy’s baby is really Bill’s. It’s a horrible thought, but Bill’s pretty connected and could somehow set up a situation in which Steffy learns that baby Kelly is his.

For example, he could pay off someone at the hospital to “discover” that the original paternity test was wrong. This could have a devastating effect on Steam’s relationship, and it would (sigh) give Bill more access to Steffy through the baby.

Will Bill take his manipulation to the next level and mess with baby Kelly’s paternity results? Is he obsessed enough to pull a stunt like that, just to stay connected to Steffy? And what would happen to Steam as a result? Stay tuned to the CBS soap and don’t forget to check CDL often for the latest Bold and the Beautiful spoilers, updates, and news.