BY Marcy Cohen on April 18, 2018 | Comments: one comment
Related : Soap Opera, Spoiler, Television, The Bold and the Beautiful 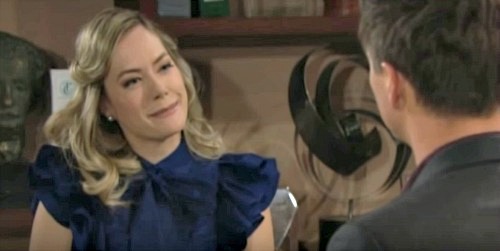 The Bold and the Beautiful (B&B) spoilers reveal that Hope’s (Annika Noelle) fighting a battle she just can’t win. Ever since Hope returned to Los Angeles, she’s been stuck to Liam (Scott Clifton) like glue. Hope supported Liam’s reunion with Steffy (Jacqueline MacInnes Wood) for a while, but it didn’t take long for her to backtrack on that. Now that Liam’s in Hope’s life again, she’s looking for more.

Hope should know better than to cozy up to the notorious waffler. She thought she was on the verge of a second chance with Liam, but now he’s leaning toward Steffy again. The Bold and the Beautiful spoilers say Hope will sulk as Liam and Steffy grow closer. She’ll fear her shot is slipping away.

Of course, Bill’s (Don Diamont) scheming could throw “Steam” a real curveball. If he tries some paternity funny business, he could derail Steffy and Liam’s future briefly. Bill definitely has something devious in store, so expect the unexpected on the CBS soap. 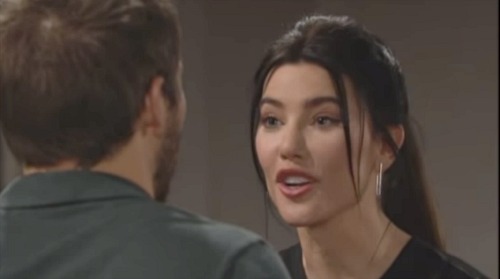 Nevertheless, it seems obvious that Steffy and Liam are endgame. Let’s face it: nearly every story revolves around Liam on The Bold and the Beautiful. That means his love interest tends to be front and center, too.

Annika Noelle’s still the new kid on the block, so B&B probably won’t rip Jacqueline MacInnes Wood from her top spot permanently. Wood’s been with the show on and off since 2008, so she’s earned the right to portray Liam’s better half. Steffy and Liam will likely end up on solid ground sooner or later.

Plus, Steffy’s carrying Liam’s baby. Soaps often use a kid to pull split couples back together romantically. In other words, The Bold and the Beautiful spoilers suggest Hope’s setting herself up for heartbreak. After Liam jerks her around a bit more, he’ll inevitably leave Hope pining in a pool of her own tears.

However, there’s someone else who could have heartbreak in his future. Bill recently forced Wyatt (Darin Brooks) and Katie (Heather Tom) to call off their engagement. Can this relationship last without true commitment? Both of them may grow restless, which means they could be headed for a breakup.

Reuniting devastated Hope and crushed Wyatt would be a no-brainer. Perhaps that’s been B&B’s plan all along! Do you think Liam will ultimately choose Steffy? Will Hope and Wyatt reconnect over their pain? We’ll give you updates as other news comes in. Stick with the CBS soap and don’t forget to check CDL often for the latest Bold and the Beautiful spoilers, updates and news.