BY Sean O'Brien on June 17, 2018 | Comments: one comment
Related : Soap Opera, Spoiler, Television, The Bold and the Beautiful 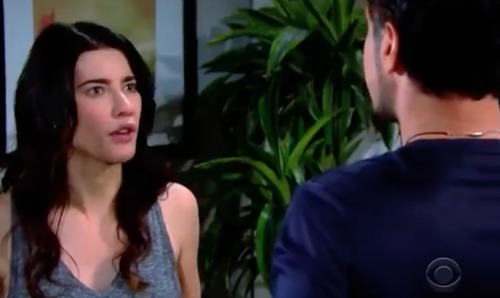 The Bold and the Beautiful spoilers tease that Liam’s (Scott Clifton) plan to revive Steam via marriage will motivate his father, Bill (Don Diamont). The obsessed head of Spencer Publications still believes he is destined to be with Steffy (Jacqueline MacInnes Wood), which will further more drama this summer.

Bill is simply biding his time. He believes that something will come up in Steam’s near-term future. But if that doesn’t happen, then Bill is likely to fully employ the blackmail option as part of a two-step plan.

Taylor (Hunter Tylo) was and remains mentally fragile, as B&B fans learned in recent months. She’s a sympathetic figure, actually. But the fact that she shot Bill gives Diamont’s character ongoing emotional leverage. Whether he can press Steffy to leave Liam, as is his goal, based on the threat of turning Taylor into the authorities as his real assassin remains debatable.

Sure, Bill will likely reassert his implication to the woman he’s obsessed with. Steffy will never come to care for him, even if Steam splits at some future point. But that power point will be overlooked as this revisited storyline unfolds.

Bill is currently calculating various scenarios. He needs to neutralize Liam, or even remove him from the picture and then attack further.

Would it be hard to imagine Bill having been involved in coercing a false baby Kelly test result? Of course not. Having made Liam the false father would mean that Dollar Bill is the actual dad of Steffy’s daughter.

Liam wouldn’t be in the same spot as he was when having accidentally learned of Steffy’s one-night Forrester guest house stand. But his daughter would be ripped from his soul forever. Kelly’s life would then come to represent the living result of that fateful night.

This type of scenario is plausible because viewers willingly travel to B&B land each weekday mid-afternoon, time-shift the story, or stream it on a personal gadget at a later point. Nothing is impossible in this imagined version of Los Angeles, California.

First, Bill creates chaos by having Taylor arrested. Then he reveals the paternity reveal which again rips Steam apart.

Sure, Steffy wouldn’t love Bill. But she and her child would be forever tied to this horrid individual. Katie (Heather Tom) knows what that’s like and would then serve as a source of counsel.

Dollar Still is coming? Steam ends again? The answers to both questions will be learned as devoted daytime viewers consume escapist TV. CDL is a leading source for everything linked to The Bold and the Beautiful. Check back regularly for B&B spoilers and news!