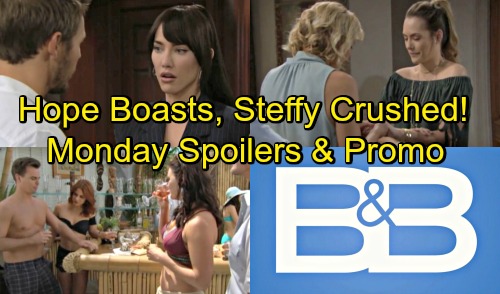 The Bold and the Beautiful (B&B) spoilers for Monday, August 13, tease that Hope (Annika Noelle) will spread the good news. She’ll rush home to tell Brooke (Katherine Kelly Lang) that Liam (Scott Clifton) truly committed to her. He dropped to one knee and proposed with the right ring, so Hope will feel confident about their future.

Once Hope brings her mom up to speed, Brooke will be delighted. She’ll believe everything’s working out just like it should. Ridge (Thorsten Kaye) will get updates on the official engagement nearby. He’ll scowl and fold his arms as he stews. Ridge still doesn’t think this is what Steffy (Jacqueline MacInnes Wood) wants deep down, so he’ll be sure to say so.

The Bold and the Beautiful spoilers say Brooke and Hope will disagree. They’ll do their best to make Ridge accept the situation, but he’ll just worry about Steffy and Liam making a mistake. Meanwhile, Steffy will share an emotional moment with her ex. She was visibly upset over Liam’s proposal, but that doesn’t mean she’s ready to take him back.

In fact, Steffy will be more convinced than ever that this is how it has to be. She’ll reflect on her past with Liam, so they’ll enjoy a good dose of nostalgia. However, Steffy will reiterate that she’s his past and Hope’s his future. She’ll want them to be happy together, but she’ll admit letting Liam go is going to be hard.

Steffy is also letting go of her dream for a united family. They won’t be raising Kelly under one roof, so that’ll make all of this even tougher. Nevertheless, Steffy will focus on her inner strength and push Liam to do the same. She’ll believe they’ll come out on the other side as better versions of themselves.

Elsewhere, Wyatt (Darin Brooks) will bump into his ex and her new man. With Sally (Courtney Hope) by his side, Wyatt will spot Katie (Heather Tom) and Thorne (Ingo Rademacher). Naturally, they’ll address their new relationships. Wyatt will wonder if Katie got Bill’s (Don Diamont) approval yet, but she won’t think it’s any of his business. Of course, Bill will make it his business this week on B&B!