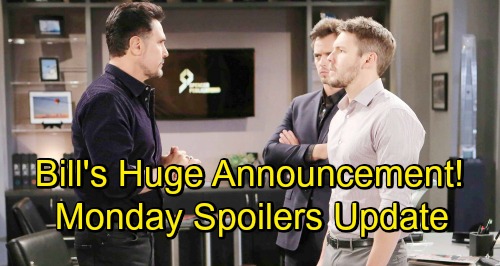 The Bold and the Beautiful (B&B) spoilers for Monday, November 19, tease that a heated confrontation’s on the way for Ridge (Thorsten Kaye) and Brooke (Katherine Kelly Lang). Bill (Don Diamont) will once again be a source of contention in this troubled marriage. It’s clear to Ridge (Thorsten Kaye) that Bill wants Brooke back and will do anything he can to make it happen.

Ridge will maintain that Bill isn’t the good guy he suddenly claims to be. He’ll try to poison Brooke’s mind against her ex, but she won’t listen. Brooke will note that Bill did Ridge a huge favor by not throwing him behind bars. In fact, he did Ridge two favors. Bill refused to press charges after Ridge hurled him over a balcony ledge. Now he’s refusing to pursue justice over the custody case tampering.

Brooke will think Ridge should just be thankful for the lucky break and let his grudge go. However, Ridge will hate that Bill’s manipulating Brooke. He’ll warn her to keep her guard up, but Brooke won’t think that’s necessary. She’ll approve of the changes Bill’s made and trust that he’s being completely genuine.

Ridge will object to Brooke’s blind loyalty, especially since she’s still holding his latest mistakes against him. He won’t think it’s fair for Brooke to give all her loyalty to Bill instead. Of course, Brooke may point out that Ridge hasn’t done anything to prove himself yet. Ranting about the rival who let him off the hook isn’t helping.

B&B spoilers say Brooke and Ridge will be at odds for a while, but the tension will lift later this week. Thanksgiving will leave them with full hearts and a deep appreciation for each other. Nevertheless, Ridge is right about Bill wanting a “Brill” reunion. You can bet Bill will keep at it, so more drama’s ahead.

In the meantime, Wyatt (Darin Brooks) and Liam (Scott Clifton) will get major Spencer legacy news. Bill will call them together to make a huge announcement about their future. The Bold and the Beautiful spoilers state that some special family moments are coming up.