The Bold and the Beautiful Spoilers Next 2 Weeks: Steffy Longs for What She’s Lost – Total Terror For Taylor

BY Heather Hughes on November 18, 2018 | Comments: one comment
Related : Soap Opera, Spoiler, Television, The Bold and the Beautiful 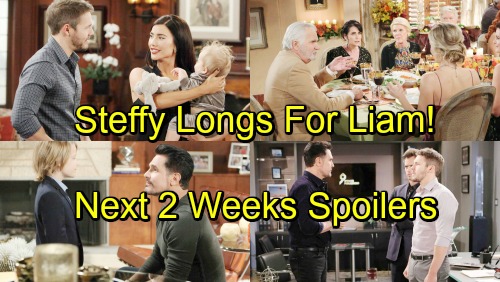 The Bold and the Beautiful (B&B) spoilers for the next two weeks tease that some gripping scenes are on the way. During the week of November 19-23, Steffy (Jacqueline MacInnes Wood) will face some bittersweet moments. She’ll be happy about celebrating Kelly’s first Thanksgiving, but she’ll also long for what she’s lost.

Steffy once dreamed of enjoying this holiday as a family with Liam (Scott Clifton) and their little girl. She’ll have to settle for a different kind of family unit, but Hope (Annika Noelle) will manage to lift her spirits. Despite any conflict they’ve had in the past, Hope won’t hold a grudge – not right now anyway. She’ll realize it’s important to come together and create a peaceful atmosphere.

Other Bold and the Beautiful spoilers say Katie (Heather Tom) will proceed with caution. She won’t want Thorne (Ingo Rademacher) to know she’s meeting Bill (Don Diamont), so she’ll schedule their visit with that in mind. Katie will make sure it transpires after Thorne heads off to work.

Once this meeting kicks off, Katie will reveal that Bill’s parental rights are officially back. Their legal drama will be over, so Katie will hope they can put this behind them. She’ll hate that things got so out of control, but at least Bill’s stepping up to be a good father now. Something good came out of the chaos!

Meanwhile, Quinn (Rena Sofer) and Pam (Alley Mills) will face off before the Thanksgiving gathering. They’ll naturally play nice at the dinner table, but don’t expect this forced harmony to last. We should also note that B&B will be preempted for sports coverage on Thursday and Friday, Novemeber 22 and 23, so don’t expect new episodes toward the end of the week.

Fortunately, the action will pick right back up the following Monday. The week of November 26-30 will bring total terror for Taylor (Hunter Tylo). She’ll once again grow paranoid about the shooting and the cover-up that followed. Bill (Don Diamont) gave his word that he wouldn’t turn Taylor in, but she’ll worry that he might change his tune.

The Bold and the Beautiful spoilers say Steffy will hear Taylor’s concerns and dismiss them. She won’t think there’s any need to fret, but she might be wrong about that. Over with Detective Sanchez (Jeremy Ray Valdez) and Justin (Aaron D. Spears), they’ll become suspicious of Bill’s attitude. They just won’t get why he’s so against solving his own attempted murder.

It sounds like the next two weeks will bring some shockers. We’ll give you updates as other B&B news comes in. Stick with the CBS soap and don’t forget to check CDL often for the latest Bold and the Beautiful spoilers, updates and news.