BY Heather Hughes on October 28, 2018 | Comments: one comment
Related : Soap Opera, Spoiler, Television, The Bold and the Beautiful 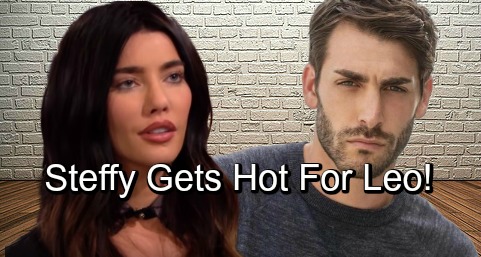 The Bold and the Beautiful (B&B) spoilers we’ve got some comings and goings news to pass along. First, we should mention Donna’s (Jennifer Gareis) big return. B&B fans have been waiting on this for a while now, but her comeback stint is finally kicking off. The show usually just lets Donna pop in for weddings and other family gatherings, but she’s here to stay this time around.

That’s because Donna’s getting a major storyline and it ties in with a fragile couple. Quinn (Rena Sofer) and Eric (John McCook) were solid until one little engagement caused a downward spiral. Once Charlie (Dick Christie) proposed to Pam (Alley Mills), chaos erupted. Since Quinn’s against having the wedding at the Forrester mansion, it’s led to intense conflict with both Pam and Eric.

Naturally, that’ll leave Eric vulnerable to his ex’s potential advances. The Bold and the Beautiful spoilers say Eric and Donna will reconnect on this week’s new B&B episodes, October 29-November 2. He’ll accidentally stumble across her in lingerie, but he’ll open up once the shock wears off. Eric will worry about the sudden hit to his marriage, but Donna will promise to be there for him. She’ll assure Eric that she cares as she touches him tenderly.

B&B spoilers hint that Pam will use Eric and Pam’s bond to her advantage. She’ll do some scheming soon, so it sounds like we’ve got another love triangle brewing. Quinn, Donna and Eric will be involved in a sizzling plot together. In the new issue of Soap Opera Digest, McCook voiced his support for the story. He’s excited about this return and the drama it’ll bring to the table.

“I’m so happy for our show that Donna is back and we get to introduce this character again,” McCook said. “Jennifer is very happy to be here again; so am I and so is Rena.” McCook added that it was an excellent “opportunity to mix it up.” The Bold and the Beautiful fans won’t want to miss the mayhem Donna causes!

It turns out Steffy (Jacqueline MacInnes Wood) could be mixing it up, too. She’ll model lingerie for a hunky long-time buyer named Leo (Sam Myerson). This is just a guest starring role for now, but it could always turn into something more. Many viewers are going nuts over the possibility of a new man for Steffy. Leo would be an incredibly handsome option, so maybe B&B will go for it eventually.

On Twitter, Myerson teased fans with a sexy pic and a cryptic caption. He said, “I wonder what happens…” and added some fun emojis. Will Leo take his shot with Steffy or keep things professional?

Regardless, Steffy could start thinking about a new romantic future. Leo will undoubtedly enjoy this private show, so Steffy may consider putting herself back out there. Liam’s (Scott Clifton) moved on, so why shouldn’t Steffy?