The Bold and the Beautiful Spoilers: Monday, October 29 Update – Bill Gives Brooke His Sword – Quinn Won’t Back Down

BY hellodrdavis on October 29, 2018 | Comments: one comment
Related : Soap Opera, Spoiler, Television, The Bold and the Beautiful 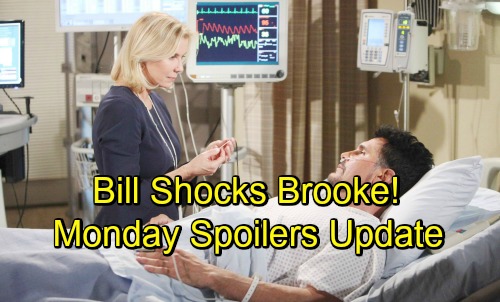 The Bold and the Beautiful spoilers update for Monday, October 29 tease that Brooke (Katherine Kelly Lang) will be thrilled as Bill (Don Diamont) wakes up from his fall-induced slumber. Brooke begged Bill to come back to her in a moving speech, and he opened his eyes. Although he’ll still be weak, he and Brooke will have some touching moments alone together.

Bill will tell Brooke how much she means to him, and he’ll insist that he’s going to change and become a better person. Then, as a gesture of how strongly Bill feels for Brooke, he’ll ask her to remove his beloved sword necklace. He’ll give her the necklace as a symbol of his love for her and his commitment to change going forward.

Meanwhile, on the new B&B episode on Monday, October 29, Eric (John McCook) and Quinn (Rena Sofer) will continue to be at odds over Pam (Alley Mills). Quinn and Pam just had a major blowup over Stephanie’s (Susan Flannery) portrait, during which Quinn put her foot through the portrait. Eric was heartbroken over the damage, and he doesn’t understand what Quinn was thinking.

As far as Eric is concerned, Quinn knew coming into the marriage that Stephanie was a big part of his life, and he believes she should be gracious about Pam and Charlie (Dick Christie) having their wedding at the Forrester estate. But Quinn will stick to her guns and insist that the wedding is NOT taking place in her home.

It looks like Eric and Quinn’s argument is only going to get worse on Monday’s episode, with neither of them backing down or compromising in any way. How are they going to resolve these problems between them? Someone’s going to have to give over the wedding/portrait issue eventually.

It looks like we’re in for some great drama on Monday’s episode! Stay tuned to the CBS soap and don’t forget to check CDL often for the latest Bold and the Beautiful spoilers, updates, and news.