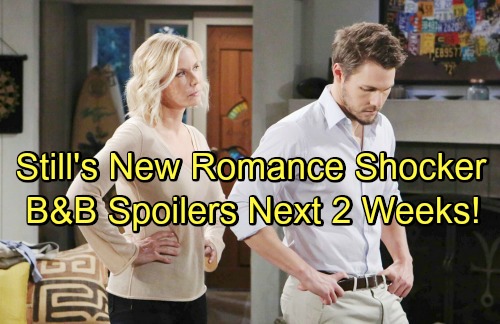 The Bold and the Beautiful (B&B) spoilers for the next two weeks tease that some bombs are about to drop. The week of July 23-27 will bring devastation for Steffy (Jacqueline MacInnes Wood). She’ll walk in on Hope (Annika Noelle) and Liam’s (Scott Clifton) steamy lip lock. To make matters worse, Hope will be half-naked in a dressing room when it happens.

Steffy will be in a lot of pain, but she’ll use it to fuel her next tirade. The Bold and the Beautiful spoilers say Steffy will really let Liam have it. She’ll bring him to tears as she hurls insults and accusations. Steffy will decide she’s had enough of Liam’s waffling. She’ll suggest that Hope can have him and stomp off to share the news with Bill (Don Diamont).

After another major outburst, Steffy will calm down and realize what she has to do. She’ll want to provide a luxurious life for her little one, so “Dollar Bill” is the way to go. Steffy isn’t in love with Bill, but she obviously has feelings for him on some level. She wouldn’t have had sex with Bill without a little spark.

Bill and Steffy will reach an agreement about their future together. While they decide to move forward as a couple, Liam and Hope will wrestle with guilt. They’ll get reassurance from Brooke (Katherine Kelly Lang), who’ll be tickled pink that Steffy took herself out of the competition for Liam’s heart.

Nevertheless, Hope will hate that it had to happen like this. Liam may also begin to wonder if he’s made a huge mistake. Later, B&B spoilers say we’ll see some heavy scenes as Liam meets back up with Steffy. These two will talk about the road that led them here and address what’s next.

Unfortunately, Liam won’t like what he hears. He’ll be appalled to learn Bill won after all, but Steffy will think she chose the more committed Spencer. Over with Zoe (Kiara Barnes), it appears she’ll seek a full-time modeling gig at Forrester Creations. Since she was a such a hit at the Hope for the Future launch, they may want to keep her on the campaign.

Emma (Nia Sioux) will be livid over Zoe and all her limelight stealing. She’ll feel like Zoe’s trying to get under her skin, which is undoubtedly true. However, Zoe would also like to get closer to Xander. That’s exactly what she’ll plan to do once she’s around the FC offices more.

The week of July 30-August 3 will deliver even more drama. The Bold and the Beautiful spoilers say Ridge will freak after Steffy puts on Bill’s sword necklace. He’ll try to talk her out of sleeping with the enemy, but Steffy will insist that the choice has been made. Bill and Steffy may even be married by then. If she’s wearing that necklace, it’s a sign of real commitment between them.

Meanwhile, Hope will continue to fret. She’ll feel like her own happiness is coming at Steffy’s expense. Brooke will insist that Hope shouldn’t worry about any of this. She’ll reiterate that Hope and Liam belong together, so she won’t see any reason they shouldn’t be thrilled.

Is the countdown on for Liam and Hope’s next engagement? Will Liam decide to win Steffy back instead? We’ll give you updates as other B&B details emerge. Stay tuned to the CBS soap and don’t forget to check CDL often for the latest Bold and the Beautiful spoilers, update, and news.