The Bold and the Beautiful Spoilers Next 2 Weeks: Liam Learns He’ll Be a Dad Again – Threats To Hope Rev Up

BY Heather Hughes on July 1, 2018 | Comments: one comment
Related : Soap Opera, Spoiler, Television, The Bold and the Beautiful 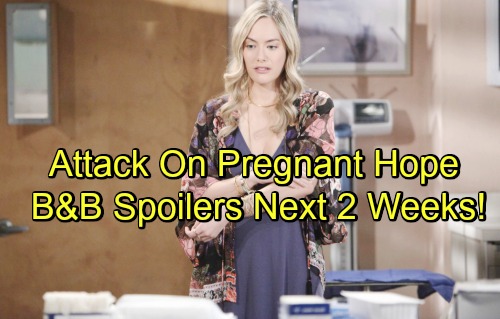 The Bold and the Beautiful (B&B) spoilers for the next two weeks tease that we’ll see some faceoffs and fireworks. The week of July 2-6 will bring Bill (Don Diamont) to Steffy’s (Jacqueline MacInnes Wood) door again. She’ll immediately start ripping into him, but he’ll insist that he’s there with a gift.

Bill will determine that he has to set Steffy free. He’ll reiterate that he wants her and always will, but he can’t blackmail his way into Steffy’s heart. Bill will likely tell her to call him if Liam (Scott Clifton) disappoints her again. He’d love to be Steffy’s main squeeze, so he may go for patience here.

Other Bold and the Beautiful spoilers say Hope will share some life-changing news with her former flame. She planned to keep Liam at a friendly distance, but she won’t be able to do that anymore. Hope will confess that she’s pregnant, so that’ll obviously shift their relationship.

Liam will have a stunning reaction to Hope’s bombshell. He’ll be incredibly overwhelmed, but it’s tough to imagine Liam lashing out. Instead, Liam may actually be moved in a good way. This isn’t ideal, but Liam now knows the love of having a child.

He also cares about Hope and would never want her to feel like her kid was a mistake. They made this baby out of love, so he’ll definitely be on board as a dad. However, Liam can’t guarantee anything as far as a relationship goes.

It sounds like he’ll have a lot to mull over. By the end of the week, Liam will come clean to a frustrated Steffy. She’ll feel like every time she pulls Liam closer, something happens that pushes him away. B&B spoilers state that Liam will do his best to calm Steffy and offer reassurance. He’ll think they should figure this out together.

Hope’s pregnancy will definitely be the hot topic in her circle, but another big Hope storyline’s kicking off. Somebody’s threatening to come after her, so Liam and Thorne (Ingo Rademacher) will want to protect Hope and her line. They’ll worry that the person behind this threat might be dangerous.

The week of July 9-13 will bring a more detailed investigation. As the disturbing warnings continue, Thorne will decide it’s time to take action. He’ll call up an IT specialist to crack the case. It looks like this is where Ken (Danny Woodburn) will reenter the B&B picture. He’ll do his best to trace the comments and expose the person behind Hope’s peril.

Other Bold and the Beautiful spoilers state that Xander (Adain Bradley) will come clean. He’ll open up about a secret he’s been hiding from Emma (Nia Sioux). This most likely involves the British accent Xander’s been covering up, but there’ll be other secrets left to divulge sooner or later.

The next two weeks will bring loads of drama, so don’t miss the hot episodes ahead. We’ll give you updates as other B&B details emerge. Stick with the CBS soap and don’t forget to check CDL often for the latest Bold and the Beautiful spoilers, updates, and news.